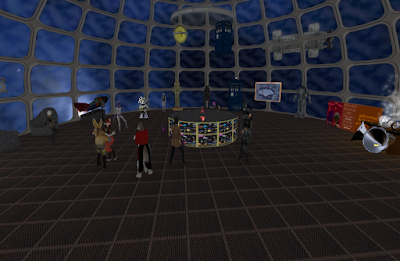 On September 8, 1966. Star Trek debuted on NBC. In honor of that groundbreaking show Andrea Jones held a dance in the Sci-Fi Station Tuesday night starting at 6 PM for two hours of science fiction themed music and dancing. The DJ was DJPiper Steampunk playing many Sci-fy related tunes, themes, and funny tunes. There was many a familiar costume and some weird ones too.

The Sci-fi station has 3 levels. The top level was the dance floor with an elevator shaft in the middle that carrier you to the lower levels. The middle level sported a small diner called the "Asteroid Diner". The lowest level had a comic version of a space tourist trap. The Exciting History of Asteroid Mining! Even with a souvenirs shop.

Many came and went as with most space stations but for as long as one was on board there was great entertainment.

Cynthia Farshore
Posted by Bixyl Shuftan at 6:02 AM