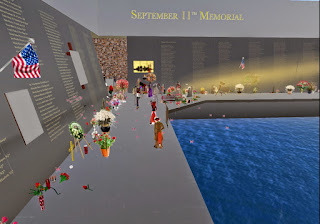 Today marks the 18th anniversary of the September 11 attacks on the United States. On this day in 2001, nineteen members of the Islamofacist terrorist organization Al Qaeda hijacked four passenger jets, sending two into the World Trade Center in New York City, and one into the Pentagon in Arlington Virginia. The attack on New York was the most destructive, with both towers of the World Trace Center hit by two of the airliners, and collapsing soon afterwards. Although badly damaged by the explosion from the third airliner, the Pentagon remained functional. The fourth airliner was probably intended for the Capitol building in Washington DC, but the passengers rose up against the hijackers, and the plane crashed near Shanksville Pennsylvania. Almost three thousand died in the attacks, most in the attack on New York. This would be the deadliest terrorist attack on American soil, and would set in motion the "War on Terror" that continues to this day.

Over the years, there have been a number of memorials to those who fell on 9/11.  Alliez Mysterio had a well-designed one about a decade ago. Others at the time included the Twin Towers memorial on New York City Block. Another was the Stairclimb Tribute to the firefighters whom died at the World Trade Center. Although these and others are gone, there are some still around, including some large ones. 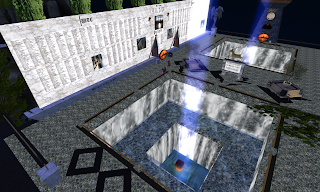 Probably the best memorial to the fallen of September 11 is the one in the Yellow River sim. Originally located in Stagg Island, last year it was moved. The names of each of those whom were killed that day are carved on white marble. The towers are represented by two square waterfalls with beams of light heading straight up. Small flags representing every nation whom lost someone to the attacks are on one side of the grounds.  The memorial was made by Fazio Magic.

There will be two ceremonies today at the Yellow River Memorial. They  will be at 3PM and 6PM SL time.

This week marks the anniversary of 9/11.    Please join us to remember the events of that day in a 50 minute service written by the memorial's creator, Fazio Magic. This memorial was built to pay homage to the souls we lost that day as a country. 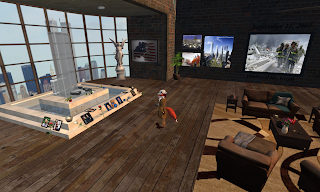 Another memorial is high above the ground in a skybox, in Tenerife. Around a central sitting area, there are pictures of scenes of September 11, and a small monument. Window views show scenes of New York City, including the World Trade Center. The region description calls it, "A Tribute to The Victims and Heroes of September 11th, 2001. 911 Memorial, 9-11 Memorial, World Trade Center, The Pentagon, NYC Fire, Police & Rescue, Flight 93, 11, 77, 175, WTC, NYPD." The place was made by Bryston Vanvleck. 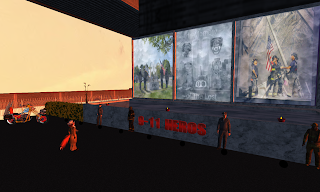 This year, there's a new memorial, the "9/11 Memorial Track and Museum." Part monument and part racetrack, at various points on the track, there are images of the event and names of those who met their end that day. The build was made Smoke Texan.

This track was meant to be cruised as you see the events unfolding. We pay tribute to the First Responders, The 9.11 Museum for the Firefighters and Police officers. the 9.11 Memorial, and Veteran's Memorial Cemetery.. TP's and Bikes are available. 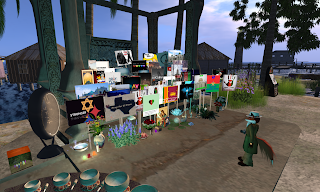 While not exclusive to 9/11, worthy of mention is the "Memorial to Victims of Terrorism Throughout the World." The display was made by Jessica Ornitz and Prokofy Neva.

I am  El Paso,  I am Kabul, I am Christchurch, I am London, Je suis Paris, je suis Bruxelles, Türkiye'nin duyuyorum, ??? ?????. Stop terrorism! Pray for victims in Sri Lanka,New Zealand, Afghanistan, Pakistan, US, Syria, all over! 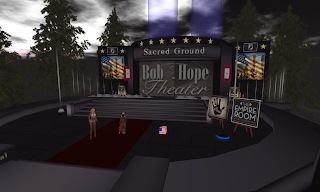 Addition: The Second Life Enquirer wrote about one memorial event. There will be a USO show at the Bob Hope Theater above the Copperhead Road sim. The show will be at 6PM SL time.