Honoring London, Manchester, and Beyond 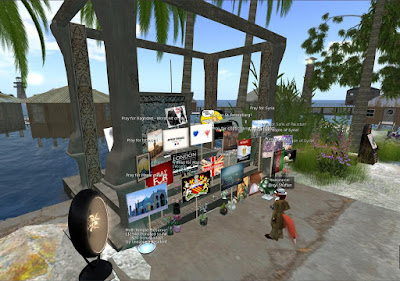 Just as the recent radical Islamist suicide bombing of an arena that killed 22, mostly children, in Manchester England was starting to fade from world news headlines, Britain was struck again with another terrorist attack, this time in London. The Islamofacist killers ran a van into people, then stormed out slashing everyone they could find with machetes, killing seven. 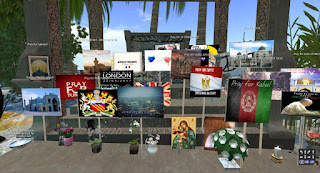 The dead of these two attacks and others are honored at the "Memorial to Victims of Terrorism Across the World," located in the Iris sim in the mainland atol continent. At a shrine, there are a number of flags representing a number of assaults across the world. This includes the Middle East, where most incidents of terrorist murders on civilians have happened. Some flowers have also been left.

The shrine itself is owned by Jessica Ornitz, The flags were provided by someone known to longtime Second Life residents, Prokofy Neva.

In recent years, Second Life has seen a number of inworld memorials to the dead from terrorist attacks, Paris 2015, Nice 2016, Orlando 2016 , Egypt Flight 804 2016, and others. Amazingly, in the past there was a sim built by people justifying terrorism, but was gone some time later, possibly taken down by Linden Lab.