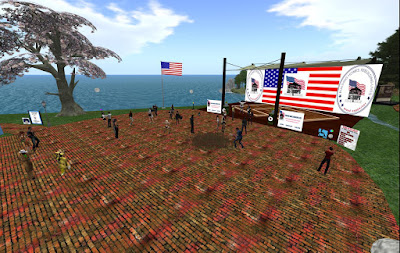 On Sunday June 25, Veterans Isle hosted a Homes For Our Troops benefit concert. The event was the sim and group's monthly fundraiser for the charity, running from 4PM to just after 9PM SL time (Midnight EST), with several live musicians and one DJ taking part.

It's that time of the month!  Our monthly benefit for Homes For Our Troops is tonight.  Funkyfreddy is first …and he is giving a way an audio copy of his show tonight to those who donate 2000 linden during his set!   Come on out, enjoy yourself and help our extremely wounded vets get a home that accommodates their needs.

DJ Waya Snowpaw started things off at 4PM. At 5PM, Funkyfreddy Republic took to the stage. Third at 6PM was Ganjo Mokeev. At 7PM, SRV4U Conacher, aka "The Blues Preacher" stepped up to perform. Last but not least was Gina Stella whom finished the event. Frets Nirvana, who helped organize the event, usually performs at the fundraisers. But this time he watched from the audience and donated some cash, which went into the two house-shaped kiosks on either side of the stage. 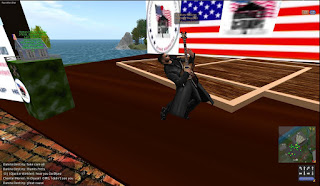 Among those in the audience were Oldesoul Eldemar and Sabine McGettin, two noted Relay for Life personalities.

The monthly concerts usually take place on the last weekend of every month. Next month's event should be on Sunday July 30.

For more information on Homes For Our Troops , check out their website at https://www.hfotusa.org