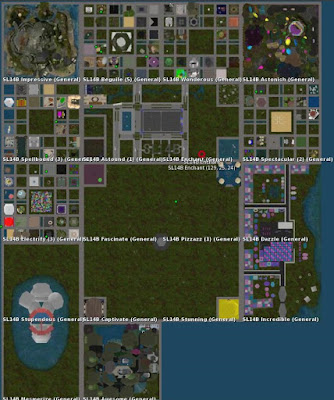 With about a week and a half until the Second Life Birthday celebrations, the map has been taking shape as more exhibitors work on and finish their plots. Among those, the SL Newser exhibit on the left edge of SL14B Electrify, which is largely complete aside from some last-minute adjustments. Silvia Ametza, the chief builder for the exhibit, informed me that after some suggested script adjustments by one of the volunteer staff, the exhibit passed an inspection.

One curious detail was that a duplicate of SL14B Dazzle appeared south of the main mass. Why this was done has not yet been revealed.

Tomorrow June 10, those applying to perform for the SL14B will be notified through email. The remaining schedule for the preparation and the celebration goes as follows:

For exhibitors, there's also a hunt one can register for, if you have a gift in theme to give.

Once again, the SL14B officially begins on Sunday, June 18 at Noon SL time.
Posted by Bixyl Shuftan at 6:01 AM