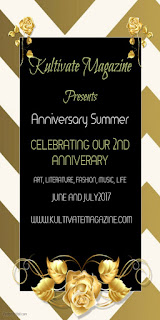 To celebrate this milestone, Kultivate Magazine will have a special weekend of events that will include, live music, dj parties, shopping, a special art exhibition, storytelling from the Seanchai Library, tribute bands, a special hunt and more! This weekend will also see the debut of Kultivate Magazine’s latest artistic component, The E.V.A Project, launch with a very special artistic fashion theater production named !Show!
The complete anniversary weekend schedule can be found below:

June 11, 2017-
12pm to 1pm slt- Art Goes Bollywood With DJ Gabriele Riel
3pm to 4pm slt-The Seanchai Library
1159 pm slt – Kultivate Anniversary Summer 17 Art Exhibition & Shopping Area Closes
Additional events will take place throughout the remainder of June and July 2017. “We are proud of this anniversary weekend and are looking forward to continuing to support the arts in Second Life and across the metaverse,” says John. “It is rewarding to see the support and dedication from various persons in Second life for Kultivate.”
About Kultivate Magazine
Kultivate Magazine is a publication about the cultural aspects of Second Life. The goal of Kultivate Magazine is to support art, culture, photography, music, and fashion. Kultivate Magazine consists of the magazine, The Edge, Edge Productions, and The Edge Gallery; The Windlight Art Gallery,  The Red Gallery,  The Kultivate Bailywick Gallery, The Kultivate Select Gallery, Ristorante Ivanna, & The Tribute and Crown Pub. Kultivate Magazine is proud to be the media partner and primary sponsor of Team Diabetes of Second Life, an official and authorized team for The American Diabetes Association.