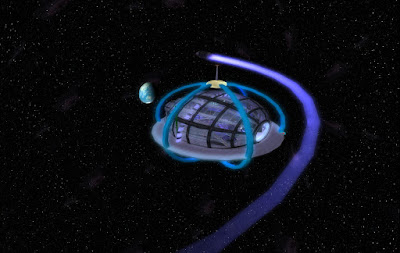 One of the best known clubs in the history of the Sunweaver/Angel community has been Club Zero Gravity. Originally a cubelike structure constructed by Shockwave Yareach, it took on the form of the space station it's been known for when rebuilt by Ranchan Weidman around 2009. The club would run for about four years from summer 2010 to August 2014. In it's last year, it was modified again, But it's "steel ball" form wasn't quite as well liked as the one it reopened under. 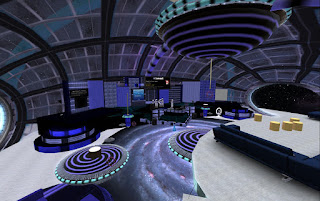 The sci-fi themed venue was so popular, there was interest in reviving it as soon as it's closing was announced. But where to put the club so it didn't "lag anyone out" and when would it play so it wouldn't interfere with the hours of other neighborhood clubs, it would take three years before solutions were found. Ranchan would work on a new design, one based on the one from seven years ago, but with some differences. Instead of a small private room above the dance floor and DJ booth, there would be an open lounge area for people to socialize and relax. The dance floor had an image of a galaxy, with a spinning spiral disk over the center. A blue terrestrial world would appear to circle the station, visible through it's windows. Since the original Zero Gravity got it's name from upside-down dance poles, there was one where a girl could dance from a spiral-pattern half ball from the ceiling. The old Zero Gravity logo was above the contest board. When someone tips the DJ, a laser light announces it. 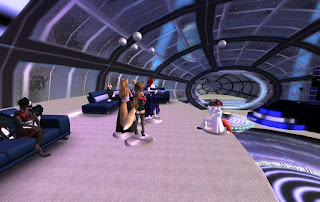 Rather than just reopen the club, it was decided to rekindle interest by doing a screenshot sci-fi miniserial comic (parts 1 and 2, 3 and 4, 5 and 6, 7 and 8, 9 and 10, final), with owner Nydia Tungsten, Ranchan, and Matoazma "Mato" Kazyanenko doing the work on the story, directing, and editing. The comic shows a crew in space finding an object that turns out to be a derelict space station. The second to final scene shows a ceremony in which Nydia is handed the keys, and the last announcing the space station club's reopening. The strips appeared in the Second Life Newser and posted on Facebook, the last one appearing on the morning of June 22. Later in the day, the reopening time was announced, 6PM SL time. 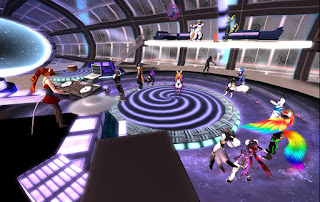 As 6PM approached, people began gathering at the club, with DJ Lexi "Sexy Lexi" Tymets, a nezumi or "anime mousegirl" spinning the tunes. Events at the Happy Vixen were canceled that night, the themes moved to next week, so the people at the beach club could get a look at the shiny new Zero-G. There was much cheering and celebration, and a 1000 Linden dollar prize for the best space-themed look. The prize was won by Nikkita (Aubrytia Resident). 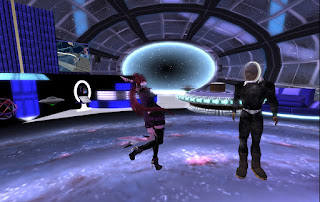 For now, the club will have a morning, or "Euro-friendly," schedule, with events on Tuesday, Thursday, and Friday from 10AM to Noon SL time. DJ Lexi will perform on Tuesday and Thursday. On Friday DJ Brandi will play the tunes. But there will be impromptu events, such as a poker game that was held over the weekend, and occasionally Nydia herself switching on the DJ booth and inviting people over.

After three years adrift, the "party among the stars" is back and better than ever. Beam on over for some space-themed fun.