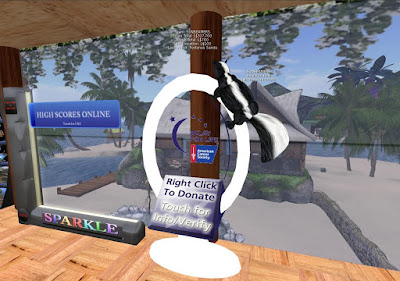 "What's that smell?" someone commented in the Relay group.

One of the ways Relay teams can prank one another is to "skunk" them. This whimsical stunk has been apparently based on the "purple potty' jokes real-life Relay teams have been known to do. It hasn't happened too often this year. So when people looked in the team totals yesterday, there was a surprise. A cartoon skunk was prancing across our team's name.

WE HAVE BEEN SKUNKED

We have been Skunked, with the Special 'STINKY' Kiosk, until June 9, 9:50 PM, to reduce the time we are skunked, you have to donate to the SPECIAL KIOSK, that Stinky is attached too.  He is currently located somewhere at The Happy Vixen Beach Club.   So come help us out and get rid of the Skunk at the Party!

In March, the Relay Rockers had been skunked, and Team Sunbeamers was among those sending members to their "Skunk Aid" party. Team Sunbeamers will be having a similar event, a "De-Skunking" party at the Happy Vixen today at 4PM SLtime. As this is a fundraiser event, people are asked to keep themselves decent, and the tipjars will be hidden or covered up: donate to a Sunny Relay kiosk instead. Donating to the one with the plush skunk will reduce the time that the Sunbeamer team is considered skunked.

There will be a contest with 250 Lindens on the board (once four people are on it) for the best in theme, skunk avatars orblack and white outfits. Already, the time has been reduced a few hours by donations made on Monday. With a little luck, "Stinky" will soon be gone, and the only skunks around will be the two-legged variety.