For those trying to get on at around 4-5PM SL time yesterday, they likely saw something like the "login failed" message to the left. Glitches in the gird were once again messing with things, and the Lab had started a round of "unscheduled maintenance." People could still stay online, but those out were staying out. 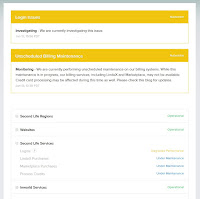 A number of events were disrupted or canceled. On the official forums, there was a thread with several pages worth of comments about the problem, people complaining about not being able to log in, "I love how the official status page describes an almost complete inability by anyone to log in anywhere as 'Degraded Performance.' " Finally at 5:38, Linden Lab posted they had resolved the login issues, with the announcement about billing issues twenty minutes later.

But not all residents would be able to get back online. As it turned out, Comcast was having some service outages over parts of the country.For customers of the service, that added to their difficulties. 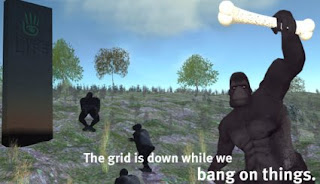 Earlier in Second Life's history, such outages occurred frequently. For hours, no one would be able to log on at all, while the Lindens posted a notice on the website, "The grid is down while we bang on things." More recently, disruption on this scale have been less common. On August 23 last year, residents were unable to log in for a few hours and some were disconnected. This time, April Linden came forward and apologized for the Lab. It was a rare moment the words "we're sorry" were heard from the Lindens.