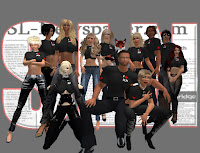 When Second Life newspaper, the predecessor to the Second Life Newser was closed in June 2010, the front page remained up for a few years before being taken down. Many of the articles remained accessible through files in the Internet Archive/Wayback Machine. Over time, some notable ones have been reprinted in the Newser, often with some commentary of what's happened since concerning the subject.

But lately, it seems the articles from before 2010 on the front page, and all but the latest one on SLN's "Community" have vanished even from there. So we're gradually recovering the ones remaining and posting them in a new section in the Newser: SL Newspaper Archived. Already, we're uploaded articles such as the return of the Svarga sim, the introduction of Viewer 2 and Ozimal bunnies, the closing of the virtual world "There" virtual world, and others. More will be uploaded over time, giving a look at our predecessor paper, and some writers whom were unable to go over with us.

To check out the archived articles, Click Here: http://slnewspaperarchives.blogspot.com/
Posted by Bixyl Shuftan at 6:02 AM