Cartoon of The Day: Why Eat Soap? 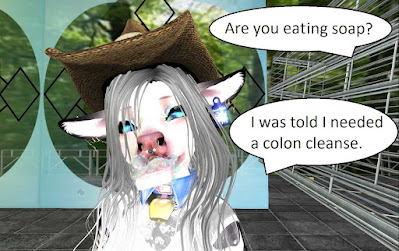 Taken at Club Squeaks. Why was this bovine lady doing with a bar of soap in her mouth? Since colon cleansing is a thing, yours truly though maybe that was the reason.
By Bixyl Shuftan
Posted by Bixyl Shuftan at 6:04 AM No comments:

Posted by Bixyl Shuftan at 6:01 AM No comments: 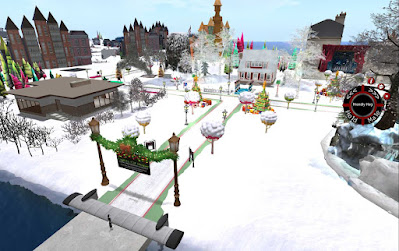 After weeks of preparation, the Relay for Life's Christmas Expo is underway. This year's theme is "The Magic of Holiday Stories." There are 11 sims where you can attend music and dance parties, make a bid in auctions, buy a raffle ticket, get your photo taken with Santa, take park in a snowman making contest, walk around and enjoy the holiday scenery at your leisure, and of course all the shopping.
For more details, check out the blog: https://slchristmasexpo.com/
http://maps.secondlife.com/secondlife/Lights%20of%20Hope/3/128/23
Posted by Bixyl Shuftan at 10:01 AM No comments: 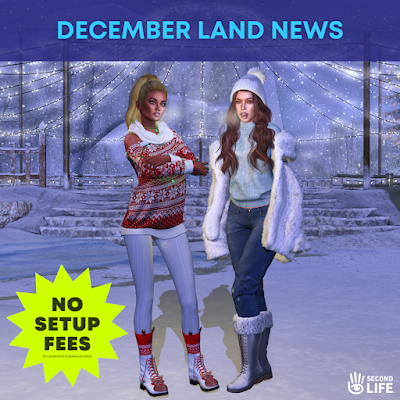 Yesterday in the official blog, Linden Lab had a couple announcements. For those interested in getting sims, the Lab has an early Christmas present. They stated that there would be no setup fees for sims purchased in December.
Premium and Premium Plus subscribers will pay no setup fees for any new regions purchased during the month of December. Only pay the first month’s maintenance fee and move right in.
To read the blog post in full, Click Here. To read comments in the forum thread, Click Here. 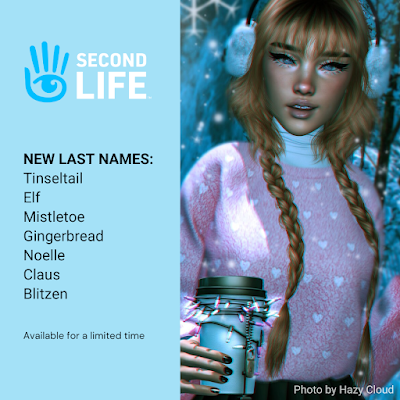 Also, the Lab also announced new last names, Christmas-themed ones.
Tinseltail
Elf
Mistletoe
Gingerbread
Noelle
Claus
Blitzen
The Lab stated the names are up only "for a limited time," though may be back next year.

Comparing this months list of names to the original list in April 2020, only a few names remain:  Atheria, Huntsman, Voxel, Littlepaws, Takeda, Dallas, and the option to change to the generic "Resident."
To read the blog post in full: Click Here.
Posted by Bixyl Shuftan at 6:04 AM No comments: 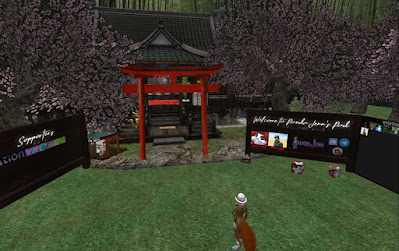 Fans of Panda Jenn (PandaJenn0 Resident), online cartoonist and artist, might like to know that her public hangout, "Panda Jenn's Pad," has moved. With the help of  Logan Bamaisin (Laufiair Hexicola), it was also rebuilt.

The Pad itself is of Asian (mostly Japanese) style, and has a number of rooms, including an art gallery with some of her work and a game room (not all of the games work). There's also a club area for any music and dance parties.
This is the third version of the Pad, the first going up in 2020, and the second in 2021. The second held several events on a sporadic schedule, such as an anniversary party.
https://maps.secondlife.com/secondlife/Bagheera/211/199/3902
Bixyl Shuftan
Posted by Bixyl Shuftan at 6:03 AM No comments: 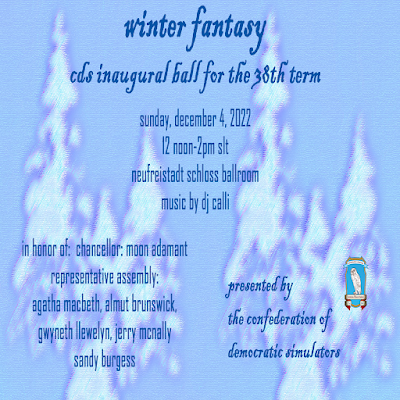 This Sunday We will celebrate the beginning of our 38th Term and our new government!

Formal attire requested,
(unless you are coming as a snow flake;)
Wings welcome

http://maps.secondlife.com/secondlife/Neufreistadt/245/142/203
Posted by Bixyl Shuftan at 6:02 AM No comments:

This Saturday at The Science Circle 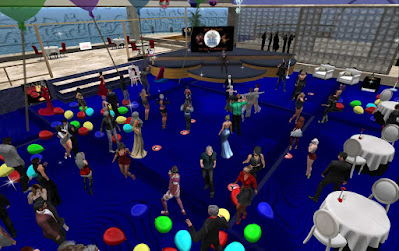 Last night, November 30 at Nat's Jazz Club, live singer Bat Masters gave one of his final performances in Second Life, if not the last. He was retiring from performing music due to declining health.
Bat Masters has performed inworld for over a decade, at a variety of venues such as the Lavender Field. He was among the singers who performed over a decade ago in an event to support fellow musician Beth Odets when she was having surgery for brain cancer. For years he played the guitar. But with his nerve disorders, his profile stated that he had Primary Lateral Sclerosis that I was told had advanced to ALS.
There were over 70 people at the venue when I arrived. Linda Sautereau, who owns the club, told me at one point she saw 75, "He's one of the special ones in here. ... he is one of the nicest, kindest and most talented people I've met in SL and I've been here since 2007."
Bat's voice was somewhat rough, but he sang well, the last song being Frank Sinatra's "My Way."

And now, the end is nearAnd so I face the final curtainMy friend, I'll say it clearI'll state my case, of which I'm certainI've lived a life that's fullI traveled each and every highwayAnd more, much more than thisI did it my way
At the event, there were many cheers and well-wishes. "We love you Bat!!" "Bat you are one Class Act." "I'm not crying, shut up!" "The entertaining won't cease entirely, but it is an honor to recognize your contributions as you experience a transition of phases most of us can only find unimaginable. Big love to you, Bat." Bat smiled, saying before leaving, "good night dear friends." Over the stream, he would say to his supporters, "Thank you for all you've done over the years."
Wherever Bat goes next, we wish him well,
Hat tip: JardenAlexis
Bixyl Shuftan
Posted by Bixyl Shuftan at 6:02 AM No comments: 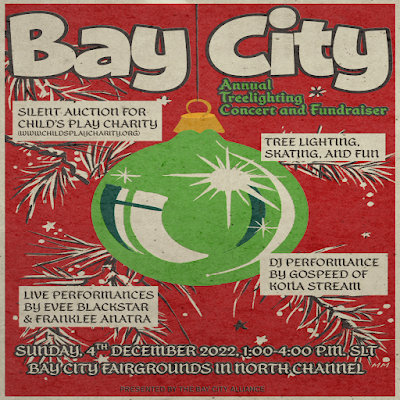 Charity event returns on the 4th of December

Providing music for the tree lighting are DJ GoSpeed of KONA Stream, as well as live performers Evee Blackstar and FrankLee Anatra.

As part of the event, a silent auction supporting Child's Play Charity (www.childsplaycharity.org) will be held.

Second Life® designers and artists who wish to participate by providing fun, interesting, unique, or other transferrable items (or a no-copy object that the auction winner can give to you to redeem their prize, if the item(s) have to be no transfer) may contact ThomasHooker Resident to participate.

Auction will end at the conclusion of the event. All proceeds from the silent auction and from donation bins at the venue will go to Child's Play Charity. Child's Play is a 501c3 non profit organization offers online communities such as ours an opportunity to help seriously ill children around the globe during their hospital stays with the purchase of games and gaming equipment.

The event will also feature many other fun activities, including ice-skating, dancing, and refreshments.

Bay City is a mainland community, developed by Linden Lab® and home to the Bay City Alliance. The Bay City Alliance was founded in 2008 to promote the Bay City regions of Second Life and provide a venue for Bay City Residents and other interested parties to socialize and network. It is now the largest group for Residents of Bay City.
Posted by Bixyl Shuftan at 6:01 AM No comments: 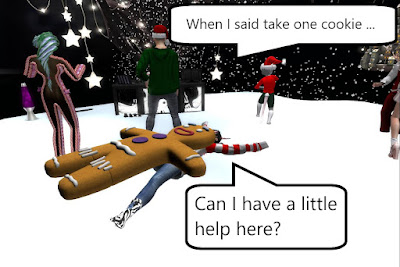 Taken at a Christmas party, I forget how someone ended up under a giant gingerbread man. But one can think of one possible explanation.

Posted by Bixyl Shuftan at 6:04 AM No comments:

On her search for Christmas places, Gemma Cleansate found three that got her interest. Under The Tree had plenty of decorations and gifts. At Tex's Tree Farm, you pick it, you chop it down, you take it home. Over at Christmas Delights, among the items to get included three hundred outfits, plus one could do some skiing and skating.

Posted by Bixyl Shuftan at 6:02 AM No comments: 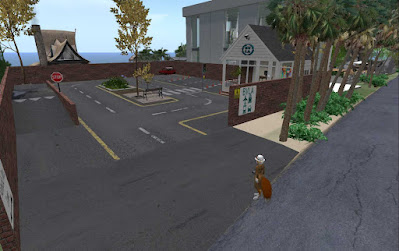 The folks at the Bellisserian Bureau of Bureaucracy are at it again. It seems besides the passports they've been issuing, there appear to be plans in the words for a drivers license. In ta recent group announcement of theirs, they mentioned a driver's safety course.
You may know the BBB have now added the requirement of a Written Test for a BBB drivers license. We'll make Bellisseria safer! Did you know though that there's a small training center run by the Bellisseria Vehicle Licensing Agency? It's open for anyone to practice & you can rez any vehicle at the rez zone just outside the entrance (LM takes you there). The course is really tight like Bellisseria streets, but you can drive out into deepest Gaeta if you like.

More details are in the BBB Gazette. The person who suggested the drivers license was listed as Persephone Emerald. For now the talk of a license is just that, talk. But the course in Junapel, Gaeta is open for anyone wanting to practice. Or you could just use the rez zone next to the place and just drive on.
http://maps.secondlife.com/secondlife/Junapel/7/90/29
Bixyl Shuftan
Posted by Bixyl Shuftan at 6:01 AM 1 comment: 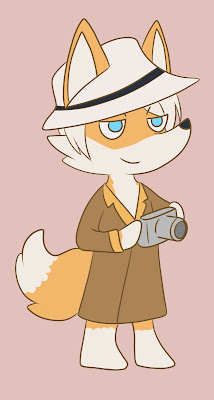 From Cherriebelle of Furry Fashion, a little artwork of your friendly neighborhood news fox as an "Animal Crossing" style character.
Posted by Bixyl Shuftan at 6:05 AM No comments:

Events This Week at the Sunweaver and Montecito Bay Clubs, The Fallout Shelter, and Furry Fashion Lounge

Here's what's going on at the Sunweaver and Montecito Bay clubs, The Fallout Shelter, and the Furry Fashion Lounge.

Read the schedules in SL Clubbin'
Posted by Bixyl Shuftan at 6:04 AM No comments: Yesterday at November 28 at 6PM SL time, there was a grand opening event for the Talia Painting Exhibit at Netera's Coffee Shop and Enchanted Mermaid Gallery. The event featured live musician Austin Moores. Though when I got there, it was Helena Navarita doing the singing.

Artist Talia Sinsong would say of her works via the notecard announcing the event, "'Fire and Water' is about that brilliant sea of color in the sky and water at the moment of sunrise or sunset. I also included another fire in the sky, a painting with the flash of lightning as a ship weathers a storm.

I am passionate about creating a mood or telling a story in my creations, including painting, drawing, writing, 3D computer models or immersive virtual worlds. I have also worked in filmmaking and was a crew member for two Sundance Film Festival picks. I hope my artwork uplifts you and brings a smile to your face."

The exhibit was stated to last until to December 23.
http://maps.secondlife.com/secondlife/Snug%20Harbor/99/101/23
Bixyl Shuftan
Correction: Originally I wrote it was Talia doing the singing, as she was on stage. Sorry about the error.
Posted by Bixyl Shuftan at 6:01 AM No comments:

Several years ago, the Newser interviewed Hope Dreamscape as one of the co-owners of the Full Circle Club. Since then, her life, both real and virtual, has taken a number of turns, some good some bad. Eventually starting anew as Melly Callidora (MelainaGodness). she eventually became the matriarch of a clan in this virtual world. But unfortunately in real-life she faces a number of ailments, including cancer. She requested, and got, a chance to tell what's been happening with her lately.

Read Melly's story in People.
Posted by Bixyl Shuftan at 6:05 AM No comments:

Sunweaver community Rita Mariner is a longtime fan of the Subnautica game, a survival MMO that takes place in an environment they seldom go: an ocean. So when they came out with a sequel: Subnautica Below Zero, she checked it out while it was in early access and soon wrote her initial impressions. After some more time to play with it and see what's changed as the developers added some new features, and new challenges.
Read Rita's reader submitted story in Other Grids, MMOs, and Games.
Posted by Bixyl Shuftan at 6:04 AM No comments:

It Came From Bellisseria Chat: Patch Getting Pestered 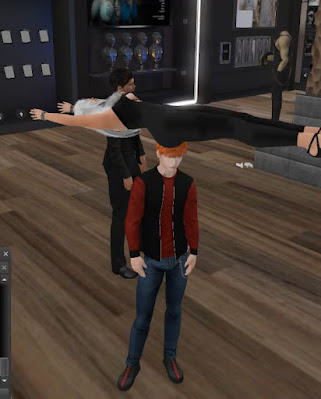 (Click here to see the animation)
While listening in on Bellisseria chat, I noticed a certain bit of conversation.
[12:51] Dreamer Pixelmaid: Patch (Linden) shopping, and Riot (Hax) and somebody else pestering him https://gyazo.com/fb900783739e1c7f70c5c37c0894dd64
[12:51] Riot Hax: I was shopping
[12:52] Riot Hax: Dreamer was spinning on his head
[12:52] Dreamer Pixelmaid: That wasn't me. I'm a good girl
Seems poor Patch can't go shopping without getting hellicoptered.
Posted by Bixyl Shuftan at 6:01 AM 1 comment: