Scenes at the Relay 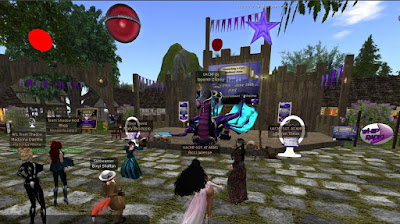 It isn't just humans and furs who take part in the Relay for Life. Avariel Falcon, the dark unicorn, is a somewhat frequent sight at their events. But there are others as well.

On Friday June 9 at 4PM, DJ Geerkil Ziskey made an appearance at the "Unmasking a Cure" Medieval Faire. Although it was before "prime time," Geerkil drew a crowd whom usually imagine dragons at Medieval events breathing fire instead of making music.

Hello, I am DJ Geerkil, I will be performing LIVE for the UAC's third annual Relay For Life (RFL) event on June first from 4-6 PM SLT and June ninth from 6-8 PM. I ask that all my friends please support this event to help with cancer research. Help save a life today! I will be performing at the Village Square Stage. ?? This is a Medieval Faire. It features dozens of live performers and djs, medieval style tournaments and demonstrations, an expanded Activity Sim with areas for role playing, rentals, fortune telling and etc. This year the faire boasts almost 100 merchants who are all selling items for a 100% donation, in support of Relay For Life. Please consider being a part of this event and know you lindens are going for a great cause. Any and all tips go directly to support RFL.

Geerkil DJs every Tuesday afternoon at the Happy Vixen, also at 4PM.

The Medievalfest goes on until June 18. 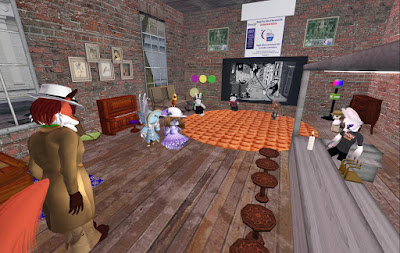 On Saturday June 10 at Noon, a number of tinies from Team ACTS had an event in New Toulouse at the Tiny Social Aid Club. DJ Mani "Owlbear"  Hancroft was the one playing the tunes. A cardboard cutout of Shady Fox, whom passed away over a year ago from cancer and remains fondly remembered by many, was placed behind the counter. Oldesoul Eldemar was there in his own tiny avatar.

These were just two of the events going on this weekend. Among which are the two "Bid Me" events going on at Club Cutlass. Several hundred more Linden dollars have been donated in the kiosks since we last wrote about them. Donate more while you can