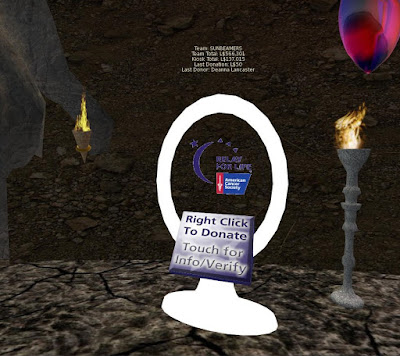 It was a day Artistic Fimicloud would have been proud of.

When the Steampunk Land and Sky Races event for Team Sunbeamers, in cooperation with Mel's Maniacs, started yesterday, the "beamers" had raised a total of 412,500 Linden dollars. We were well into Gold and 150,000 Linden dollars away from Platinum rank. We had achieved this seemingly impossible dream last year. And once again, it was within sight.

And once again, the little team that could pulled it off once again. Near the end of the day, thanks to several people who reached a little deeper into their pockets, and of course the hard work and cleverness of Cynthia Farshore and Shockwave Yareach, our shooting for the moon had once again resulted in the Eagle landing.

For those of us lucky enough to be at Cynthia's Road Rally/Air Race today.  We made PLATINUM!  We cracked the level at the dance down in the Goblin Cave, while listening to great music, DJ'd by Cynthia.  Oldesoul and several members of other teams showed.  We even helped Meli's Maniacs make SILVER.  All in all a very successful event.

Team Captain Rita Mariner's only complaint was that not everyone could be at the race and party. And some people contacted me, saying events in real life had kept them away and were sorry they missed the event.

Some teams manage to make it big once, then for whatever reason are unable to make an effort the following year. While the Sunbeamers are not the most successful Relay team, they, and their predecessor team the Passionate Redheads, have made good showings year after year after year. The Relay has been a source of community pride, and we were happy to share that pride with Mel's Maniacs who took part in this and other events this year.

But our work isn't quite over. We still have our campsite for the Relay Weekend to work on. But this time, the little team that could will be taking part in the walk around the track a little prouder, flying it's flag a little higher. Many from the Sunbeamer community and outside contributed in some way with time, money, or both, some people in large ways. And once again, our effort has paid off.