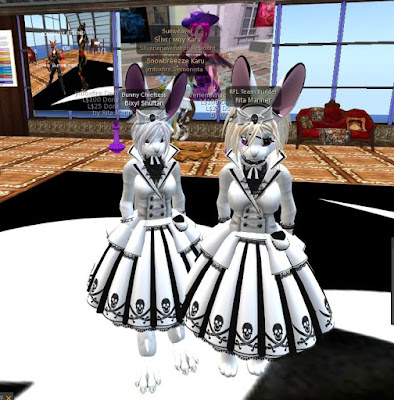 Those who know me well know that I almost never take on a female appearance in Second Life, at least deliberately. But with the Sunbeamer team needing something to help encourage them on the way to Platinum, once again I offered to put my avatar's appearance on the line. Last year, the result of us going Platinum was me going pony for a week, an avatar I had never had worn. And so I offered another challenge of similar scale, going about in a female avatar for a week.

Maybe it egged on team captain Rita Mariner a little, but the results in any case were the team going Platinum, so I had to make do on my promise. BUT, I didn't say what kind of female look. So when we kept steadily heading to the mark, an idea came to me: get a look as close to our team captain as I could. I asked a few mutual friends first as many who prefer furry avatars take being unique seriously. When I was told she wouldn't get upset, I went for it. Luckily, she had told people what brand dress she had. Getting the hairpiece and the feet was another matter and had to get items that were close. As it turned out, the store where she got the hair was no longer around.

So what did the "Killer Rabbit" think upon seeing the results of the avatar challenge? She had a good laugh, considering it funny and clever, and had the idea of posing for this picture. So for a week, yours truly will be in a skirt. The only complaint so far, one girl ribbing me that I should have done a look based on her. But considering her chest, the results would have given me a backache just by looking at it.

But it's all in the name of fun, and for a good cause, the Relay for Life. And yours truly can say it took a large amount of money to take this step. It just went to cancer research, not me.

I am posting 2 days in a row, but this one is too good not to put up. As I mentioned before my Second Life team, The Sunbeamers, raises money for the RFL and the ACS (American Cancer Society). Well we had a small side bet going from one of our members, Bixyl Shuftan. He said, if our team made Platinum, he would go female avatar for a week. We did and yesterday evening he revealed herself to a waiting crowd, at my Club Cutlass. I was surprised, delighted and laughed some. Bixyl came dressed as a Rita Clone, or as close as he could get. It was like looking into a mirror. He spent some time and money on this one. Good Going Bixyl, you got me!