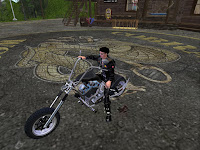 Wesley Regenbogen has been riding on the wild side lately. He met up with a motorcycle club called the "Cobras MC," and began hanging out with them with the idea of doing a story on them. But they got along well enough to the point he was invited in, or "patched in" to borrow a term from biker lingo. So who are the Cobras and where do they ride? Wesley had a few things to say.

Read Wesley's story in People.
Posted by Bixyl Shuftan at 6:02 AM