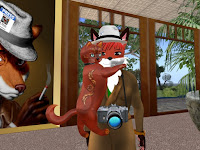 For the Second Life Newser's seventh anniversary, Deaflegacy would interview the two founding writers of the publication. She would interview Gemma Cleaslate, and then Bixyl Shuftan. As the editor and head writer of the Newser, Bixyl's thoughts were on how the paper got started and it's first days. Seven years later, the publication his team started has kept going strong as Second Life's number one source of news.