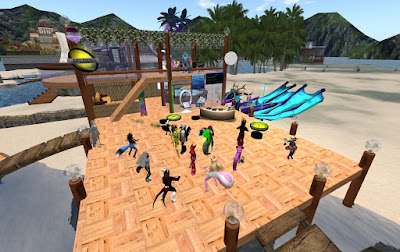 June 6 might have been called "D-Day" for the Relay for Life Team Sunbeamers, though in this case the "D" would have stood for "de-skunking." The morning before, it was discovered someone had "skunked" the Relay team. So a "De-skunking" party was planned at the Happy Vixen  DJ Geerkil, one of the few dragon DJs around, spun the music. 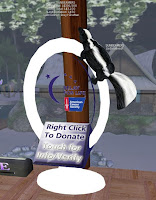 Oh noes! The Sunbeamer RFL team has been skunked! Help the Sunbeamers by donating to the skunk kiosk (the one with the skunk plush on it), and help reduce the time in which "Stinky" hangs around. Dress up in skunk avatars or black and white outfits. As this is a Relay event, please keep it clean and don't show anything "bad."

The event had a small number taking part, including team captain Rita Mariner, and raised about 5,000 Lindens for the Sunbeamers.  Becky Shamen contributed a prim skunk with a Sunbeamer t-shirt. More had been donated into the "skunk" kiosk before and after the event, reducing the amount of time the team had been "skunked" by a little more than a day. On Thursday June 8 at 8PM SL time, things were back to normal for Team Sunbeamers.

But the Relay goes on with over a month until the Relay Weekend of July 15 and 16. The current events going on are a couple of "Bid Me" events. Rita is once again putting her fur on the line with a "Bid Me Pink." And then, there's me. Yours truly is going through with a "Bid Me Human" event. I volunteered for one for the Passionate Redheads in 2011, and the results were 29,000 Lindens raised. Stuck in the look for almost a month, I would end up writing about my experiences.

For both "Bid-Me" events, the "change" kiosk will have to have gotten more cash than the "stay" one and be at least 3000 Lindens for the volunteer to change for at least a week. For every additional 3,000, they'll stay in the form for another week, up to the Relay Weekend. The results are tallied a week from now on June 16.

So if you want "Fox News" to go human for a while, now's your change. You may have to wait another six years for another chance. The kiosks are at Club Cutlass at Sunweaver Bay  (114/117/757),