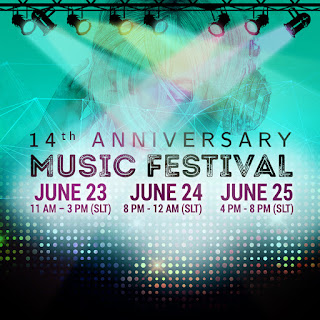 Xiola Linden posed in the Linden blog yesterday June 13 about the schedule for events sponsored and arranged by Linden Lab for Second Life's anniversary. First of all mentioned was the shopping event organized by Linden Lab going on until June 26. Then she mentioned their Music Fest.

We are going to rock the Grid with three days of music - from Italian Opera to full on Psychedelic Rock - and you won’t want to miss out on that. Our 3rd Annual Music Fest is coming, and so much cooler than Coachella - literally, you can blast the air conditioning or fans from the comfort of your computer! Details about lineup and location to come - but be sure to save the dates, get your tail feathers ready to shake, and find those ‘rock on’ bento gestures for the show!

The event takes place over three days, Friday June 23 to Sunday June 25, with four hours of music each day. On June 23, the action takes place from 11AM to 3PM. The location and lineup were not given out yet. 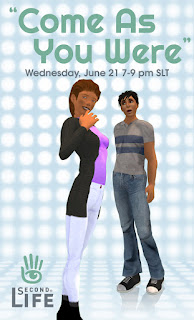 But this wasn't all. Xiola announced a couple "costume party" events for the anniversary, "Come As You Were," a "noob" avatar themed party, and a "Masquerade Ball." Both will be at the "Cake Stage" at the SL14B grounds.

We will be hosting two costume parties inworld - Come as You Were, and a Masquerade Ball. We all come into this (virtual) world as total n00bs, and the Come as You Were party is a nod to those days of yore - whether it was yesterday or over a decade ago. Put your best Ruth forward, as there’s a costume contest and a L$5000 prize on the line! We’re also hosting a Masquerade/Masked Ball - where mystique and intrigue are sure to reign supreme! There is also a L$5000 prize for the best at the ball! Both parties will take place at the Cake Stage in the SL14B Community Celebration Regions - stay tuned for details once those locations go live! Those Regions will also be home to where you can pick up a special commemorative avatar and bonus gift from the Lab.

Xiola also mentioned the resident-run SL14B, and posted the link on the Destination Guide to SL14B events, and asked residents planning any other special events for the anniversary to contact them about it.