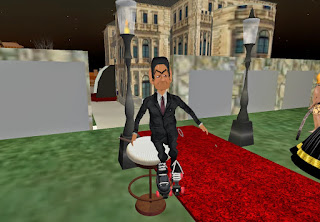 In January 2008 I was part of a tour group that dropped by the Caricavatars sim, a place of biting political satire of American, French, and global politics owned and run by Christophe Hugo. At the time, I wasn't sure what to think of him as while he gave our group the codes to his mock-up of the White House, he booted a friend of mine for asking a question about an exhibit that had stirred up a little controversy. When his response to my article was to tell me he had banned the whole tour group. I came to the conclusion this was someone whom couldn't take criticism but had no trouble dishing it out.

Checking my articles, I found a comment made by him, calling himself Chris Zeil, in response to my reprint of my story, "It is interesting to read your article and reflect on my tenure in Second Life as a caricaturist, almost ten years after I ceased my activities..." He told me that he hadn't been thrown out by Linden Lab as I was told, but he had left on his own as "I eventually grew tired with untrained moderators taking down with no notice some of my 3D exhibits, every time there was a risk they may offend a community (most frequently the muslims', or the christians')." Of his booting people out for asking questions, he stated that he had been dealing with large numbers of visitors, many of whom came just to troll and grief, and basically stated it wasn't always easy telling apart the trollers and critics.

Zeil stated he had no regrets about his time in Second Life as "it allowed to develop my approach to 3D caricatures, which was useful in eventually developing a drawing style I am now using to publish comic books" in real life. However, he was expecting some trouble from the begining as he considered Linden Lab's "main priority is first and foremost to attract an increasing number of customers. Hence they want to be mainstream, and will avoid controversy at all costs and aim for political correctness, even if it means curtailing freedom of speech."

"In retrospect, I believe that satire is not a fit for for-profit companies like Linden Labs. ... the space of Second Life always remained what it was from the start, i.e., a for-profit corporate space, not a public place. This very much limited freedom of speech, hence artistic freedom. Let's hope that future virtual worlds will not follow the same path."

One wonders what Zeil/Christophe would think of JP Laszlo of the "Trump Organization" whom in 2016 was the center of even more political-related controversy. But Zeil would probably be the first to point out that JP had a very public throwing out and then coming out as a member of Woodbury.