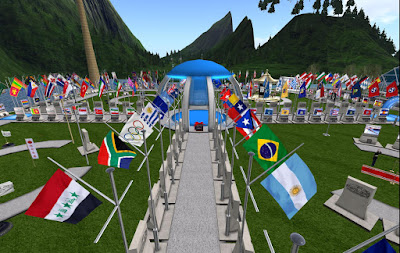 With Canada Day and the Fourth of July just around the corner, Residents from the United States and Canada may want to get a flag to help celebrate. While you could shop around on Marketplace, one place inworld you can get on is the Flag Factory at the Made in Paris sim.

Dropping in, one will be surrounded by banners of many kinds. The store boasts, "More than 400 countries and topics with 14 styles of flagpoles : hand-held to huge." The sizes most vendors offer are 4m 10m 23m, hand-held, and "street." There are also "conference" and "ultimate" packs one can purchase for extra cash. The ones of the latter two for the United States are showcased with their own vendors. Besides the standard US flag, one can also get a weathered "Old Glory" or a combination US and Texas flag. The store also offers a Canada and Quebec flag combination. I was told that the store is offering hand-held US flags for a limited time.

There are flags of just about every nation on the planet, and for individual US states, Canadian provinces, and French localities. There are also flags for holidays, flags for personalities such as Michael Jackson and Nelson Mandela, pirate flags, gay pride flags, even a gay pirate flag, castle flags, and more.

Some residents may recall the controversy about the Confederate flag a couple years ago. While it has been largely taken down from Marketplace, one can buy it here. However, I couldn't help but notice where it was placed, right next to the Cuban and Venezuelan flags, two countries with noble people, but repressive governments. Perhaps coincidence. Perhaps a subtle statement of some kind.

The Flag Factory is owned by Frenchy Kazan