Scenes From the SL14B: "Match Game" 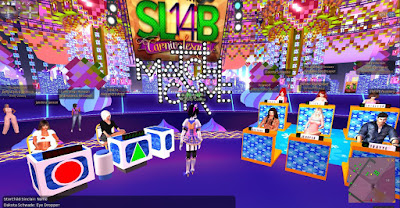 On the night of June 20 from 9 to 10PM SL time, Catboy Qunhua held an inworld version of "Match Game" inside the SL14B Cake Stage. Two contestants had to fill in the blanks to phrases given by one of a panel with Tindallia Soothsayer and five others. It was an hour of game show style entertainment that used to be better known in Second Life in the days of "The 1st Question," though one can still find it in places, such as Luskwood's "Primonary."
Posted by Bixyl Shuftan at 6:02 AM