Meeting Lindens at the SL14B 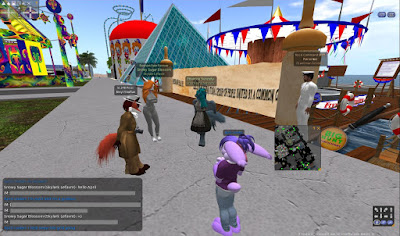 You'll come across many hundreds, perhaps thousands, of different people going about the SL14B. One I came across was a newcomer here on day one, whom I talked to some and gave her a landmark to "The Shelter." And among those there were some Lindens. One I found skipping down the path: April Linden. She stopped to chat with me and a couple friends at the Second Life Coast Guard exhibit. 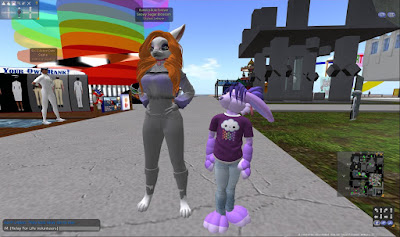 The "Gridbun" as she called herself was happy to pose for a picture with Skylark Lefavre, the manager of the Happy Vixen club. Skylark is a big bunny fan and happy to see the furry Linden going about as one. 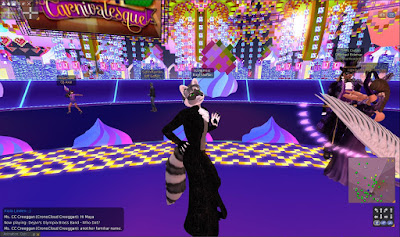 A chance to meet more Lindens was at the Masquerade Ball on Monday June 19, which ran from 11AM to 1PM at the Cake Stage. Yours truly showed up as an avatar with it's own built-in mask. 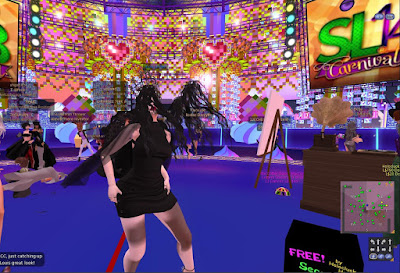 Unfortunately for me, and presumably a number of others, the large number of avatars present (and perhaps some of what they were wearing) kept causing my viewer to overload and crash. The pictures I managed to take were mostly of crowds half-rezzed, half-naked, or both. This was the best picture I could get of Xiola Linden, who organized the event, before my Firestorm quit on me again. There was at least one other Linden at the event, Simon Linden, but I never did see him with my crashy viewer.

There was a 5000 Linden dollar prize, which was won by Polly Ellsmere.

There will be one other event in which you can expect Lindens to show up, the "Come As You Were" party, also at the Cake Stage, today from 6-8PM SL time.