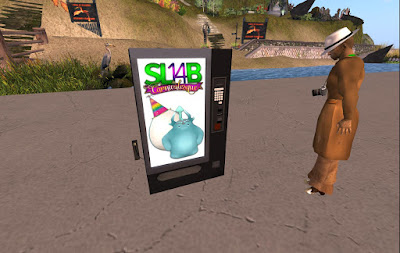 With most Second Life Birthdays in recent years, Linden Lab provides a gift avatar, The one this year is available as part of a "Special and somewhat mysterious gift set."

The avatar, at the included egg, are available on several spots on the SL14B grounds, at least until the sims close after Midnight July 2.  I got mine at a vending machine at SL14B Beguile (0/112/22/). The items are what the Lab calls a "Sananok" avatar, and a "mysterious egg." 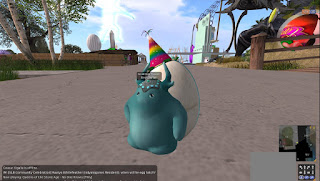 "We’re not entirely sure what a Sananok is, but the Moles assure us they are friendly creatures that tend to keep to themselves and need a good home. Each Sananok avatar comes with a mysterious egg, which is  in fact so mysterious, not even the Moles know what it will hatch into." The egg jostles and moves a little bit when the avatar carries it around.

When Saffia Widdershins interviewed Patch and Dee Linden on June 19, Patch hinted the avatar and egg may be related to an upcoming game by the Lab in the late summer or early fall. So far, no hints what it might be.