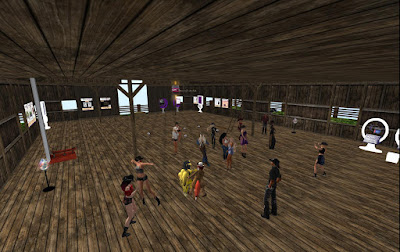 On Saturday June 3 was "Country For a Cure," a marathon twelve hour event from 10AM to 10PM SL time. Organized by Team Shadow, four other teams would send DJs over. The DJs were: Sasha Fairywren, Aryon Dagger, Otenth Paderborn, Bella1Abbot, Ari Sparks, Catalysis Resident, Fizban Underwood, and Madonna Daehlie. The event took place in a barn in a skybox high above the sim.

Besides dancing, including line dancing, people could throw darts or try to ride a mechanical bull. But most who tried to tame the beast were thrown off in just a few seconds. There was also a bit of chaos when someone walked in with her motorbike still attached, and when she danced, people dodged to get out of the way from the wildly swinging piece of metal.

Other teams were invited to drop kiosk over if someone would hang around. Among them was the Sunbeamers, who got a few thousand Lindens from the event. Gem Sunkiller stated that the event had raised at least 138,000 for the teams involved.
Posted by Bixyl Shuftan at 6:01 AM