What's in The Water at Luskwood? 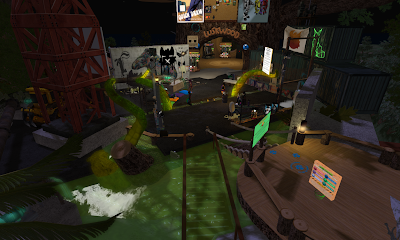 Occasionally, the "Big Tree" at Luskwood gets a new look for a few weeks, such as the time it went Egyptian. But I received a tip from Spooked Dreamscape that their latest theme was a rather uncheerful one. Heading over, much of the place had a dim, gritty, industrial look, with water that was green with some unknown chemical, looking a bit toxic, and something stretching tentacles out of it. The evening sky contributed to the dark image of the location.

I noticed a sign in a few places, saying something about water purification and industrial runoff. But it was obscured by another proclaiming "Rebellion," saying that the water was unsafe to drink and asking the residents to unite against the "Council." On the bottom was the Lusk symbol with closed eyes and an "X" where the mouth would be.

It's unknown how long this dark and gritty display will be up. With Luskwood's anniversary in about a month and a half, presumably it will be taken down by then.