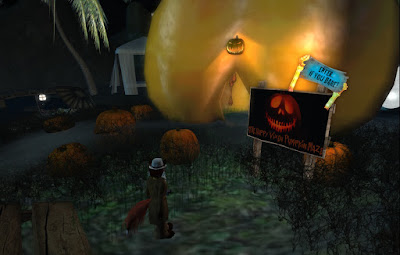 The Happy Vixen beach club is getting ready for Halloween. Besides the darkness that has fallen onto the club (unless one sets their viewer to daylight), Jasmine Dawn, who made a special Halloween area in 2013 for Club Zero Gravity, has made a haunted pumpkin maze.

Highly suggested to be in mouselook while in the maze.

Turn up your speaker volume for that good surround sound effect.

And above all, have fun and enjoy the maze.

Going inside, it's a dark twisty maze full of not just wrong turns, but it looks like the carved insides of a pumpkin, and occasionally some "pumpkin guts" will be dangling down. There's also an occasional skeleton, zombie, and ghost in the maze, some still, some animated. While they can't grab you, it's still pretty unnerving to run smack into one after going around a corner. 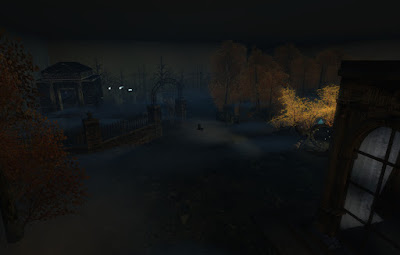 Jasmine has also been working on another special Halloween area, which was first used last night for "The Vix's" Pokemon and Creepy vs Cute events. Accessible from the Happy Vixen, one crosses a spooky haunted woods to get to the main building, which is where the dances will be held for the rest of the month.