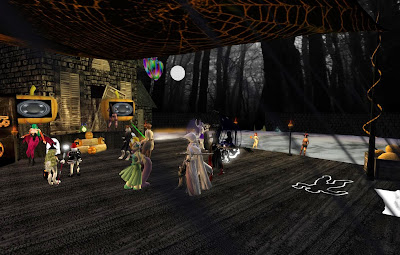 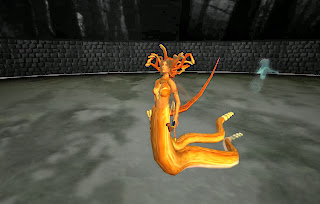 Among the clubs in Second Life having special Halloween events in late October was Club Zero Gravity. To begin with, the space club decided to have it's events from mid-October to Halloween not at the station, but in the "Haunted Woods," a platform created by Jasmine Dawn Shuftan. Last night's party was "Good vs Evil Night, with partygoers dressed up as angels, devils, heroes, monsters, and more.

Tonight at the Haunted Woods, it's "Good vs Evil." Do you see yourself as a perpetual good guy, always wanting to do good and be righteous? Or are you the bad guy, taking delight in acts of villainy and just being bad? Pick a role, and choose a look to go with it, such as an angel or night in shining armor, or a devil or barbarian raider? Or maybe someone "evil in a good way" like a seductress. Whatever role you wish to be, wear it with pride and fly on over. 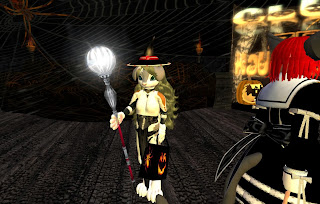 DJ Reactor spun the tunes for the party, at one point about 20 present and dancing away, "Welcome to the Haunted Woods," visitors were greeted, "Be careful about venturing too far into the forest, as those who go too far often vanish, waking up later on the beach with no memory how they got there."

The party went on for two hours, and eventually it was time to decide the winner. Skylark Lefarve was the one who got the most votes for the 500L prize.

The next party at Zero-G's Haunted Woods is on Thursday, Halloween night, which is sure to be filled with fun, dance, and another prize to give out to the best costume. The party's at Purrfection Estates Hautned Woods (216, 39, 1314).