Second Life Bar Association members Kylie Sabra (under her alt Agenda Faromet) and Tim Faith, lawyers in real life, discussed Second Life's new Terms of Service in regards to content creators and their rights. As it turned out, so many people were turning out for the discussion, the setting was moved from the Justitia Virtual Legal Resource Village to the Rose Theater in the Angel Manor sim. The sim was packed with over seventy residents, and the only way more people could get in was if room was made by someone inside crashing. Fortunately there was a livestream available though AView TV. Over most of the discussion over 150 people were viewing the broadcast. 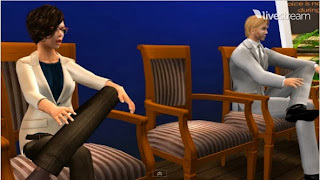 Kylie and Tim made a number of points during the discussion. The problem with "exclusive" rights over your content when you need Second Life as a platform for your content means one has to give some permissions.  In Kylie's opinion, the problem with the new ToS was that they were poorly written She compared it to Yahoo's terms, in which their permissions were "solely for the purpose for width such content was submitted," and Facebook's which demanded an unlimited license and if you shared your content with someone it's license would never end, Twitpick which required anyone requesting someone else's content to contact the company instead of the content creator and give credit to Twitpick instead of the owner, and LinkedIn which also reserved the right to "commercialize" one's techniques and ideas. So what's going on in Second Life, she reasoned, wasn't new.

Something that bothered Kylie more than the terms regarding content rights was another change elsewhere, "the worst change," in which the Lab could sue a third party in your name, and they would be your attorney. "Do I want the person who wrote these terms of service to act as my attorney? Hell no." 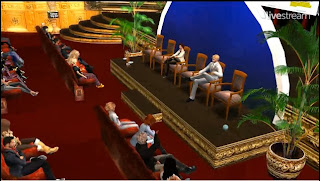 She asked people not to be "freaked" by the language of sell and resell, calling the language "sloppy drafting." How to improve the terms in question? Limit the purpose for which content can be used, limit the term of the license, and limit the scope of the license. What could happen? Kylie mentioned what happened when Instagram faced an uproar of it's own after changing it's terms of service, and within a month half it's users had dropped out. Instagram then changed the terms in question back, but no for long. A month later came new terms which essentially allowed them to do what the controversial language did, so "all of the gain was for nothing." She also mentioned the possibility of a "hostile solution" such as taking the matter up with the FCC or a class action lawsuit, "which isn't going to get anywhere because of the arbitration clause." A peaceful solution with Linden Lab, she felt, would be best.

Further in the discussion, Tim Faith felt Linden Lab was not as friendly to Second Life's users as it used to be. He encouraged the residents to "stand up for yourselves" if they thought something was wrong. Kylie felt Linden Lab wasn't really trying to make a power grab, but had structured the ToS so it appeared they could be. They also discussed California law, which Linden Lab fell under. While normally very consumer friendly, in recent years they have been more friendly to arbitration agreements. So she felt a lawsuit was less likely to succeed. 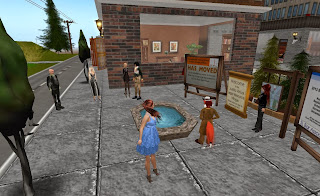 As the discussion in the Rose Theater went on, those residents still in Justitia talked about it and the issue. Eleanor Medier, the owner of the Sim Street Journal, felt it was good the matter had become a hot topic. Others were less cheery, irritable about Linden Lab, "I'm not handing them over two years of work!" "To leave is letting them win," Eleanor reasoned, "you loose (it) all anyway." "I'll lose if I stay too." "Not if changes can be made." A third resident commented, "It was a 'creative friendly' ToS before. (Then) they pulled a bait and switch... " Eleanor then looked my way, and I joined this separate discussion, bringing up Will Burns' (Aeonix Aeon) article and my interview of him.

For a recording of the discussion and Q and A, which lasted a total of about three hours, you can find one on ToysoldierThor.com. There's also a youtube of the event. And one can still find the livestream recording on AView TV's recent archive.

*Addition* A transcript of the conversation at Justitia con be found in the Sim Street Journal in its Monday Oct 21st's article.