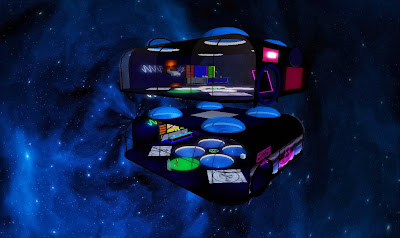 While exploring around InWorldz, I came across one notable build. Alynna Vixen has been among the residents of Second Life making accounts in this virtual world. But she did more than just that. She built a satellite location for Club Fur in InWorldz's Amber sim.

The club is not a perfect copy. Some of the finer features in the Second Life club are not there. And more obvious it's a double-copy with one on top of the other. And there was no music playing. There was no one else around, or any sign of people coming here.

Club Fur is Second Life's oldest Furry club, and possibly the oldest club still around. It was in Furnation Prime until the sim closed, after which it spent a few years in Kitsuhana before it's old home sim reopened and the club once again moved.

On another note, Someone mentioned on Facebook a list of the number of active residents of the alternative virtual worlds to Second Life. InWorldz had certainly benefited from the ToS controversy in Second Life, having an active population of about nine thousand. While twice that of Avination, which it was once roughly equal in number's it's still far short of Second Life's.

Winter Wardhani wrote on her blog while she liked exploring, what kept her in virtual worlds the most was the people, and without them there wasn't much reason to stick around. Thanks to Tuna Oddfellow's Odd Ball, and others such as the Relay for Life, there is some additional activity in this alternative virtual world. But will it be enough for places like Club Fur InWorldz to be more than just backup locations, sitting empty?