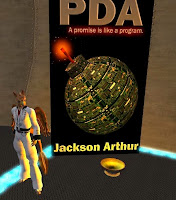 Grease Coakes recently interviewed Steve Jackson, often seen around Book Island, about his recent story "PDA." A science-fiction story, "PDA" is about an artificial intelligence which serves a lawyer, and over time becomes more than the simple program she was intended to be. It's a story in which writing it has taken Steve Jackson in a new direction.

Read Grease's story in People.
Posted by Bixyl Shuftan at 6:02 AM