Last night on October 27, the US Military Veterans Group held it's monthy Wounded Warriors benefit. From 5PM SL time to just after 9PM, four musicians performed for the crowd, which was more than two dozen avatars in size at times. 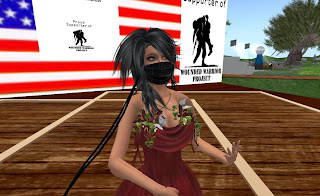 PomDman Haalan was the first musician at 5PM. At 6PM, Pete Mroz was the one making music. From 7 to 8PM, it was Frets Nirvana himself "making waves" with his music. And at 8PM, Amforte Clarity took the stage. Wearing a cloth covering over her mouth, Amforte called her performance "ninja style." The dance area was a bit Halloweeny as well with a pumpkin patch set up in the middle, and some in the audience in costume. 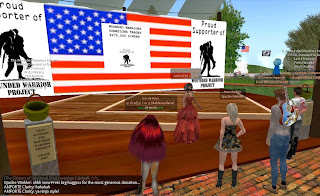 While Amforte was performing, Frets announced he would notate twenty thousand linens to the amount donated, the cash in two tip jars resembling upside down helmets. The amount raised then was 80,000 Lindens. When there was about five minutes to go, the amount had risen to 90,000. When the masked musician was playing her last song, there was about 1,500 left to go. And when the time reached 9PM SL time, the total raised had finally hit 100,000 Lindens.

Chatting with Dahlea Milena, she explained that there would be two events on Veterans Day next month, " Club Vet is having a Veterans Day event on Veterans Day, Checkers Firelight is handling that. We're having our 'Veterans Day' event here on the 10th in conjunction with the Marine Corps b'day ball." Checkers was looking for people to help out with a 21 gun salute for Club Vet. The event at Veterans Isle was Toby Keith's Tribute Concert at 8PM Sunday Nov 10.

Bixy Shuftan
Posted by Bixyl Shuftan at 6:00 AM