Aria Clash, a combat system and game which allowed residents to take part in ranged and close combat, found itself without a home this weekend. On Friday October 4, the sim held it's last battle, and afterwards closed its doors.

Kamiko Fazuku, who developed the game, explained her reasons in a letter several paragraphs long. She described "The past few months of my life" as having gone through a number of problems, in addition to having "entered a new phase of my life."

With this in mind, I have decided to suspend Aria Clash indefinitely. Perhaps forever. Perhaps not. I do not know. Indeed I may even work on it from time to time. I will be closing the sim and perhaps locking the group down. I will keep the hud on the marketplace, perhaps I'll even add a few weapon and skill vendors, should you wish to continue to play AC, or even use AC in a sim – it'll be there for you. Coming to this decision has not been easy, but truth be told – Aria Clash could not exist forever. I could not possibly spend the rest of my life maintaining it.

... one of the reasons I kept AC up and running was for you. I wanted to give people something fun to do on SL. That was my long-term goal. Money was never an issue for me, I hardly made anything. Control was not an issue, I never ordered or bullied anyone around. I simply wanted a self-sustaining place of fun on SL. A place for me and my friends to relax, and others to enjoy themselves. But alas, it has come time for me to shed AC, and put on a new coat.

Thank you AC Development Team, Each and every one of you made an important difference. The reason that there are no other systems on SL like AC is because the developer teams get to infighting and backstabbing, power-grabbing and betrayal. In AC's lifetime, I've watched about 10 systems get destroyed for these reasons, usually before they were even born. But none of you did that to me, instead you remained strong and faithful, loyal and honorable.  You were the greatest development team I've ever worked with. Perhaps the greatest development team ever! Every one of you possessed the quality most important – Heart. 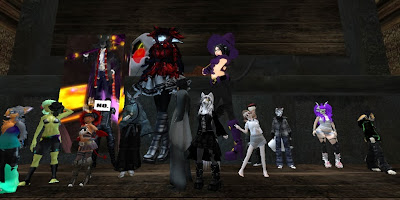 The final event was 5PM October 4. Residents began to gather at the main store, chat some about their favorite events, and engage in a little sparring. The final event, which the Newser was unable to witness due to technical difficulties, was a "Boss Fight" in which game developer Aasha "Inner Sight" Kohime controled a powerful NPC which the players battled until it was finally defeated.

Aria Clash was written about in SL Newser in Aug 2011. Described as a “feudal Japan/sci-fi crossover” the game offered both "player versus player" and "player versus enemy" combat. Their location allowed players to teleport to locations to battle NPCs for experience and game gold. Since then, the game moved to a new sim, but continued to offer combat, as well as additional weapons and powerups at a store.

Now, the community of players who have enjoyed the game find themselves without a home. As for Aasha, some time ago she started working at the pony-themed store "Clock Out," where she continues to develop and build new items for.