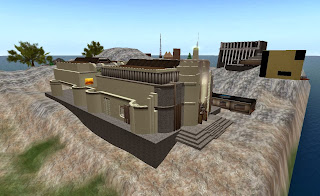 It was a fairly easy day at the Podex Exchange. Things had long settled into a new routine since the move earlier in the year. Customers had found the place again and were coming back to trade various world currencies for Lindens. And the art gallery the new place had was continuing to draw visitors, not to mention a nice place for the tellers to relax when on break. Between customers, they chatted amongst themselves about goings on. This being October, there were many spooky happenings around from Areo Pines to London, to Betham Forest, and others. And of course people were buying up spooky costumes, which meant more business for them.

It was one moment in the late afternoon while they were talking when a flapping noise was heard near the front door. They looked over, and saw a figure step though the doors. He was batlike, covered in a thin coat of black fur, with some occasional areas of dark red, with huge ears and folded wings on his back that seemed connected to his arms. His eyes were a shade of red, which gave some tellers a bit of a shiver when he looked their way.

"Um, can we help you?" One teller asked. 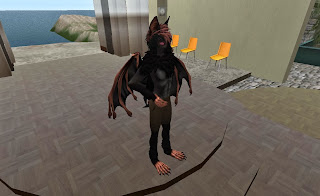 "Yes," the dark figure spoke in an accented voice, "I am in need of some Lindens. Vould you mind explaining how I get them here."

"Um, certainly Sir. Just fill out this short form, and we'l make the trade through Paypal, Ukash, direct bank transfer, Bitcoin Wallet, and a number of other means."

The figure raised an eyebrow, or seemed to as it was about as black as the rest of the fur, "Bitcoin Vallet?"

"Yes, Podex has recently began offering customers the choice of buying Lindens with Bitcoins. In case you don't know, they're an independent virtual currency not issued by a central authority."

"Yes, I know vhat a Bitcoin is. I have some. I just heard on the news that they vere at a record high, so I do vant to deal vith them before the price goes down."

"Certainly. Just press this button, and we'll be ready to begin." 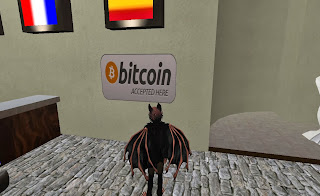 "Don't worry, your payment will be in Bitcoin. Just choose the amount of Lindens you want to buy."

It took only a few minutes to go through the form to make the transfer, and it was done in just a few minutes."

"There you are, Sir. Anything else you might need?"

"Vell," the dark figure doddered, "might you know of some dance clubs?"

"Oh certainly Sir. There's Cutlass and Club Zero Gravity and others. Looking for  music and friends?"

"Oh yes, and maybe a date." He grinned in a way that seemed very unnerving, "I understand some of the girls are into, necking." He chuckled in a wicked manner, as a number of the tellers shivered.

The dark figure then waved, and headed out the front door, taking flight and headed up into the sky already starting to darken from the setting sun.

The Podex Exchange is located at the Coda sim at (45, 218, 61), with a website at http://www.podex.info/. Jacek Shuftan is the CEO. Jacek recently began allowing the option to deal with Bitcions, wanting to support the independent currency.