This Halloween season, the Steelhead community was visited by a darkwinged visitor: a man-sized vampire bat. 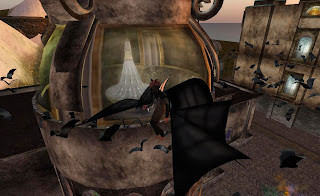 There have been scattered reports across Steelhead, though the "Scamps Ball" at 5PM Sunday Oct 27 had the most witnesses. The adults at the party were discussing recent chatter about the night-flying being, when someone noticed a dark shape hovering near the window, "THE BAT!!"

And there was the flying chiropteran, black with reddish eyes. It appeared humanoid, with dark red hands and feet, and what looked like dark red head hair. It made no aggressive moves, just looking in at the activity. Then one of the children went up to the window and tapped on the glass. The bat's reaction was to give what seemed like a friendly wave. 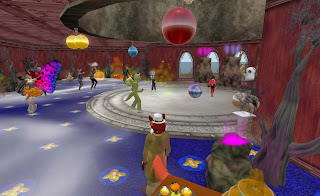 The adults in the party debated what to do. It didn't seem aggressive, so it was suggested to perhaps invite it in. Another felt it would be best to keep a weapon handy. It was at the mention of weapons that the aerial intruder flew off, heading off into the dusk. Needless to say, the bat was the talk of the party for a while.

Besides the sighting at the Scamps Ball, there have also been reports of a mysterious dark shape seen flying near a local slaugherhouse and blood missing from collection containers. There are no reports of anyone getting badly hurt, although there is one story of a woman who claimed the bat led her out of the woods after she got lost and had what appeared to be a bite mark on her neck.

There were similar sightings at Steelhead two years ago, with no serious incidents. But having a flying creature around with a taste for blood is making some residents a little nervous.

Note: The preceding story is based on a freeform roleplay that took place in Steelhead.