In a post on their community blog, Avatar Reality, the company behind the Blue Mars virtual world, announced that the company would be “restructuring in order to concentrate on bringing Blue Mars to portable touch screen devices like the iPhone and iPad.” Blue Mars Mobile will concentrate on “avatar style and rankings” with plans for Facebook connection, and a clothing store “in the next few months.”

As for their PC viewer, the company stated bug fixes aside, there were no plans for further updates.


With our focus now clearly on mobile, updates to the PC version of the software will likely be restricted to bug fixes for the foreseeable future. With that in mind, we will no longer charge our current City Developers for the monthly city hosting service. The servers will remain online, city updates and uploads will continue, and shop and residence rentals will still function but technical support for the user client will no longer be offered.


As with Linden Lab’s “Restructuring,” Avatar Reality stated that their staff would soon be getting smaller. CEO Jim Sink announced he was among those leaving. 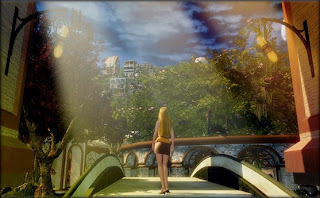 Blue Mars is a fairly new virtual world, appearing in “open beta” in September 2009. Compared to Linden Labs’ grid, Avatar Reality designed the place with more restrictions on content creation. Unlike some virtual worlds, there was no viewer for Macintosh computers. When it was new, it was seen as being a potential serious competitor for Second Life, showing pictures of cities with crisp graphics. It got the attention of some residents of the Metaverse, including the people of Caledonia whom set up a place there. Hamlet Au, the editor of New World Notes, was part of Avatar Reality for a time, and regularly did articles of goings-on in Blue Mars in both his main online newspaper and the Blue Mars official blog (called Blue World Notes for a time).

Of Avatar Reality’s latest move, Hamlet Au responded only that he was “very interested to see how Blue Mars Mobile develops.” Most other comments observed were more pessimistic in tone. Aeonix Aeon concluded the virtual world was virtually broke, and was gambling what was left of its capital on mobile app software that he felt was a doomed venture, “Most PCs short of monster gaming rigs have a hard time using the Crytek Engine, and to assume that a mobile platform would be more capable than a high powered personal computer (whether an Apple or PC) is simply ridiculous. ... I’m not aware of a mobile provider that can or will support 1 GB of data transfer per hour on a data plan, and of those who may allow such a thing, the ‘unlimited’ plan would surely be brought to its knees fairly quickly, causing massive overage charges to the user in question.”

Tateru Nino was about as blunt. It had failed to lived up to the hype to begin with, she commented, with much worse lag and a confusing interface. And now, it was being reduced to “sort of like Google Lively on an iPhone” (A gigabyte an hour she thought would quickly be cut off by the mobile's service providers) that would be bleeding money. Gwyneth Llewelyn felt the hype over Apple’s products would keep investors “happy for a few years,” but still questioned about the idea of “a dumbed-down version of Blue Mars running on an iPhone” making more money than it’s PC business model.

The general consensus is that Blue Mars will soon go the way of There.com, much to the sadness of both it’s residents and fans of virtual worlds in general. At it’s beginning, it was a sign of new possibilities. It’s retreat from the realm of PCs is seen by some as a sign of trouble for the future of virtual worlds where the content is made by residents instead of the owners.