In recent weeks, Australia has been hit by record flooding. Thousands were forced to evacuate from towns and cities, three quarters of the state of Queensland declared a disaster area. A wikipedia entry stated the death toll was 35 dead with nine missing. Damage by the floods is at least one billion Australian dollars, estimates as to how high going as far as thirty billion. 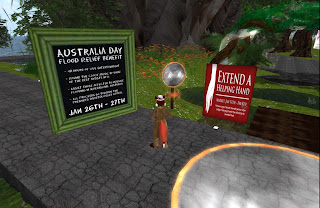 Wednesday January 26 was Australia Day, when Australians celebrate the founding of their country. In Second Life, B&B’s in the Utopia and EnGedi sim decided to hold a two day live music event starting that day to raise funds to help those affected by the flooding. Four dozen musicians were participating, such as OhMy Kidd, Gina Gracemount, and the folk band SOAR.

Get set for the Australia Day Concert: 48 hours of fantastic LIVE entertainment from 12:01am on the 26th right through to 11:59pm on the 27th. There is an awesome line-up featuring some incredibly talented performers! You won't want to miss this.

When I dropped in on Thursday the 27th, I was greeted by over a dozen people dancing and listening to the music, led by B&B’s co-owner Bundy Xue.

Bundy continuously greeted visitors with a cheerful hello, and kept encouraging people to give to the fund. The goal was to raise 315,000 Lindens, which equals 1250 US Dollars.
Among the people there was noted SL blogger Nazz Lane. Cellandra Zon was also there. 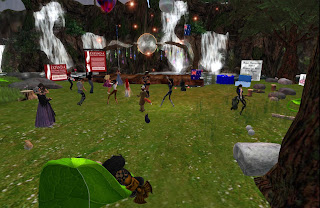 “Bundy is such a sweetheart,” one person instant-messaged me, “She has worked soo hard for this benefit. She lined up all the musicians. She made sure everything was organized. And she has been here to work it too, and greet the people. AND she was here for almost all of the 24 hours! I think she took two 3 hour breaks, and that's IT.” 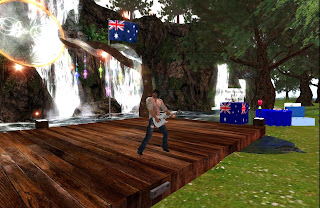 The fundraising in Second Life has not gone entirely unnoticed by media outside the Grid. An Australian news site made a mention of the event: http://news.ninemsn.com.au/national/floods/8201695/.

The event was part of a larger fundraiser, which someone mentioned had so far raised a total of over 7000 US dollars. People wishing to contribute more can visit The Extend a Helping Hand Market, which according to a notecard passed at the event will be around until February 8th, "Money raised will be donated to the Premier's Disaster Relief Appeal to assist those affected by the Queensland floods. ... You can join the Extend a Helping Hand Subscription Group to keep updated for the duration of the event, and to receive notifications when vendors release new donation items."

"Extend a Helping Hand is an event put together by Sanura Sakai to raise funds for the Premier's Disaster Relief Appeal. The aim is to provide support and assistance to those Queenslanders affected by the recent massive flooding. She started organizing the event when it hit her home-town, and on the very first day of the market itself, it swept through her own city. 75% of Queensland, at the time of writing this, has been declared a disaster zone. Many have lost their homes, and some have even lost their lives.

"To read more about the Premier's Disaster Relief Appeal, to which all funds raised by this event will go, please visit http://www.qld.gov.au/floods/. You can also donate directly, if you so desire, through the information provided on that site. To provide complete transparency to this process, transaction history for all donations will be provided at the close of the event at http://katjohnston.com. Kat Johnston is the real life name of Sanura Sakai, who will be running the event."

Another example of Second Life used to help people in real life.