This Sunday Jan 23rd, around Nooon SL time, the 2011 Sci-Fi Faire in Second Life began. Taking place in the Overtambo sim, it described itself in its press release as “a combination artist's alley and recruitment center displaying imagery and providing information about various science fiction groups.” The event also is raising funds for the American Cancer Society.

Some of the exhibits at the Faire were familiar, such as the Star Trek Museum’s Klingon House with a roasting targ inside, and Dr. Who. There were a number of less familiar ones as well. Among which was one of “The Awakening,” a science-fiction show which Doc Grun (in costume) told SL Newser would be on treet.tv, “14 episodes slated so far ... It will be the first of its kind episodic drama filmed in a virtual world. ... all of our avs and props are original builds, and sets are being built as we speak on 3 different sims.” The show had a team of about 50, scattered “in a dozen different timezones.” Doc's friend Cyndi Laville told me that Doc was another journalist covering goings on in Second Life. 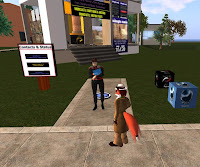 The Faire did look a little simpler than a couple previous science-fiction conventions in Second Life. SL Newser ran into Ntanel Swordthain, the man mentioned in the press release as the one to contact for questions, who explained why. “No issues thus far,” he told of how the Faire was going, “Since it goes on all week, people will have plenty of time to gather info on these groups and check out the micro-booths. All of these groups did great with the limited resources.” He explained they were testing a new model for conventions, seeing “if shoeboxing/limiting resources brings about better results,” planning to use it for a larger convention if it’s seen to work, “We cannot remove lag all together, but we can try out best to reduce it. As of right now, the lag here is from individual avatars and not the booths, so we have done rather well with the limitations.”

The Faire will continue to Saturday January 29. For a LM, Click Here.