SL Groups Raised to 42, But Your Viewer May Not Show It

A bit more than a week ago, FJ Linden announced in the official blog that the group limit of 25 per account, long the source of complaints by residents, was finally raised to 42. There’s just one slight hitch ...

Linden Labs says you need to be using Viewer 2 to join more groups.


To add groups beyond the previous limit of 25, you must be using Viewer 2.4 (or a more recent version). And if you’re still using Viewer 1.23, or a third-party viewer based on Viewer 1.23 code, then you can add more groups in Viewer 2.4 and they will still be accessible when you switch back to Viewer 1.23.


Viewer 2 has always gotten mixed reviews from Second Life residents. With improvements, some people adopted it. But even after a year, the majority of residents still use other viewers most of the time. This includes yours truly whom relies on Snowglobe. The last few times I tried Viewer 2.0, the result was a cloud instead of an avatar, and finally the latest version would not work at all on my computer. And from what I’ve been hearing, some people trying to use it crash frequently.

So does this mean we have to use a buggy viewer to join more groups? 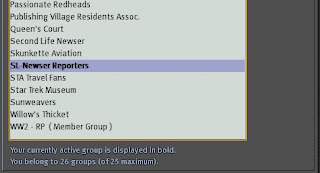 When I stumbled across a “click to join group” poster recently, I decided to give it a try, and went ahead and clicked to add myself. And it worked! So apparently, other viewers also get the new group limit, even though they still say you have a maximum of 25 groups.

Hamlet Au also did an article on the subject, and his readers commented on various viewers. It seems Viewer 1.23 and all third-party viewers based on it can also be used to join more groups. It’s just when *starting* a new group that you’ll need Viewer 2.

In the official blog, there were numerous replies of thanks for the group limit raised. There were some who did bring up the issue of Viewer 2.

On another note, the blog post mentioned improvements for teleporting and sim crossings, saying on average they’ve dropped 40%. Yours truly hasn’t noticed much of a difference.