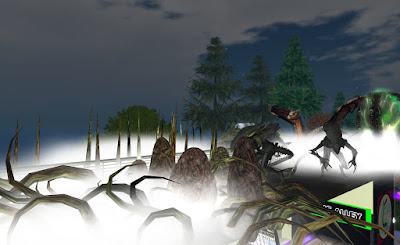 Remember the Zeta Valley Beach Warf Club that the Newser wrote about last week? It seems the "open to all" invitation for one party got an unwelcome reception when aliens descended onto the place. "Bit busy fighting an alien horde," the Dragon Crew's friend Clockwork Jackal answered when asked to join the party on the dance floor, hunkered down behind a crate, "Help me. ... got grenades, tentacles, machine-gun fire." DJ JB Raccoon's response was simply "Oh my goodness. ... alien invasion ... xenomorphs with their eggs, tentacle creatures, you name it, we have it here!"

Initially a couple "Xenomorphs," which were bad enough, the invasion was soon joined by a mass of tentacles, and some glowing green machine, either a teleporter or some other alien device that would do heaven-knows-what to any Earther nearby. The aliens took over the top of the bowling alley, and threatened to march onto the whole club, and maybe the sim. Something had to be done to save Zeta Valley.

Finally, Clorkwork brought out a weapon of last resort: a small thermonuclear device. The response on the Dragon Crew's Discord channel chat was a prediction of doom, "Never give a canine nuclear weapons." I had been at the sim, but scurried away out of range while the others presumably took cover. Tech would later send me a picture of the explosion, which was much smaller than a conventional nuclear bomb, but still big, and with the tell-tale mushroom cloud. Someone in Discord remarked, "Y'all recreating Hiroshima over there? ... It's beautiful, enough to bring a tear to FDR's eye." He then sent a request for songs from the record "Blast Radius," though retracted as realizing some were very much "not safe for work."

Following the clearing of the smoke cloud, the aliens were gone, and no one else was hurt. By morning, radiation levels were back to normal, all damage had been repaired. Everything was back to normal, at least as normal as one can expect with a club run by a dragon.