Kristen’s Viewer May Get Second Chance Through "Crowdfunder"

When KirstenLee Cinquetti (Lee Quick in real life) had the misfortune of his real-life partner falling ill, it looked like the end of the line for the viewer he developed last month as he needed to take a second job to get more money. He made the decision to go with a British fundraising website called “Crowdfunder.” The site bills itself as a way for people “to raise money to do cool stuff more easily. ... Lots of people – each giving a small amount ... The ‘crowd’ decides what’s good, what’s not, what they want to fund and what they don’t. It’s survival of the fittest for creative ideas and projects.”

On “The Kirsten’s Viewer Project” page in Crowdfunder, KirstenLee explained in a youtube, “A couple people suggested ‘ why don’t you do a fundraiser? ‘ ... As it happens, we deiced to go for it.” KirstenLee explained the attraction, “it’s an all or nothing situation, people can fund it ... if we don’t hit the target, people get their money back.” He felt a “fair” goal was 25,000 Pounds (about $40,000 US dollars) “for one year’s continuous development. ... If we hit the target that we’re asking, the day it happens Kristen’s Viewer will be re-relased” with an upgraded client.

He explained the people who fund it would get various rewards, depending on the level of their donation, such as special versions of the viewer before general release to the public, suggesting “radical changes to user interface” and special controls. He went on to say, “If we hit the target ... exceed the target ... it affords us the luxury of paying others to contribute to the viewer as well.” He hoped he might be able to hire the former Qual Linden. He also talked about the Kristen’s project being able to license things after the Crowdfunder goal was met. 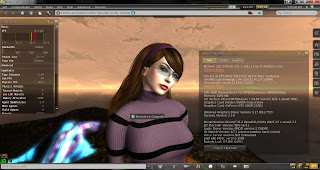 The Kristen Crowdfunder page gave a list of donor rewards from small to large. Those contributing 1000 Pounds, “You get to choose the features that get into the client for feature voting!” Also, “The TOP 10 funders will have all of the rewards Plus exclusive use of 1 of 10 Login splash screens used by the viewer! Your screen will be seen by thousands of users daily!”

The page was started on Monday October 17th, with 60 days to raise the 25,000 pounds. By Tuesday night, 2,092 Pounds, or eight percent of the total had been raised, contributed by 59 donors. The post on KristenLee’s blog announcing the news was also filled with the comments of well-wishers.

Hamlet Au had a few comments on New World Notes about KristenLee’s move. He called it, “a bid to give Second Life users more say in the future of Second Life. ... If this Crowdfunder is successful, it will help launch a new era of Second Life development that is more directly by the users, for the users.”

“ ... consider contributing a few pounds ... it’s your viewer ... we’d be happy to have you aboard.” - KirstenLee Cinquetti / Lee Quick