This Halloween, the Steelhead sims have been frequented by a winged visitor, a huge vampire bat. 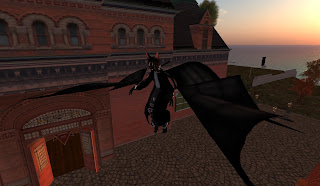 It’s unclear exactly when the dark visitor first began frequenting the skies of the noted Steampunk region, as strange things happen there seemingly every day. But sometime in October following it’s Oktoberfest celebrations, people began seeing a huge creature flying overhead. Not a true bat, the being is described as a “were-bat” or “man-bat,” humanoid-shaped with arms, legs, and hands, wearing dark clothes. On the ground, it stands over six feet high, and in the air has a wingspan over a dozen feet across.

So far, the only complaint about the bat concerns the slaugtherhouse, in which the disappearance of gallons of cattle and pig’s blood has been linked to the vampire bat, as it has been sighted there, “That would have made good sausage. Why does this beastie want the product raw?” 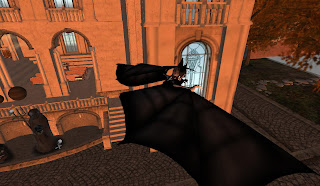 The vampire bat has not made a serious attempt to assault anyone. It did reportedly break up a nighttime attempted purse-snatching, sending the thief panicking and running into the direction of a neighborhood policeman on patrol, who arrested the petty crook on other charges. The woman was later found, with what seemed like a hickey on her neck and a wistful smile on her face. When asked it the bat tried to harm her in any way, she answered, “Oh no,” then happily sighed.

A couple scientists are reportedly searching for the bat, wanting to study it for Science!. But so far the aireal interloper has evaded them. There has been no comment from the office of Sheriff “Fuzzball” Ortega.