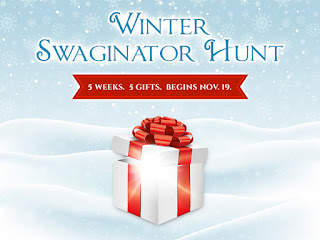 Remember the SL15B Gift Grab earlier this year? Every Monday for fifteen weeks, residents would check the official blog for the clue to where the gift of the week was, then head there to get it. For people who really enjoyed the hunt, Linden Lab had some good news on Monday November 19. They're going to be doing another one for the Christmas season.

‘Tis the season to be jolly - and what could be more jolly than a ton of new gifts? From now through most of December, we will be giving away some goodies for everyone. We introduced the Swaginator this last summer during SL15B, and now we’re bringing it back, better than ever, with 5 weeks of gifts - starting today! Each gift will only be available for one week, so you’re going to want to make sure you do not miss out on any week! 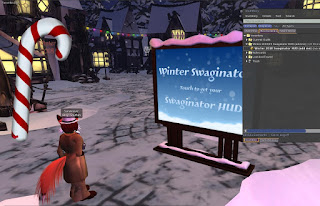 The first clue leads to both the Winter Hunt's "Swaginator" HUD and the first gift, "It’s a Winter land full of frolics and fun. Can you find the hidden chest for the prize to be won?" The location leads to Portal Park, which is a place one can get to the Winter Wonderland. Close by where you enter is where you pick up the "Swaginator" HUD. Just touch the sign, find it in your inventory, and attach. It appears as a candy cane on your screen.

Finding the location of the first gift for this hunt was harder than those in the Gift Grab as there was no SURL to the gift and the Winter Wonderland is not a small place. But eventually, I found it. Upon collecting the gift, a mark appears on the bottom of the candy cane.

The hunt will go on for four weeks after this one. Linden Lab also stated there will be a snowball fight event soon. Earlier, they called on merchants to sign up for a holiday-themed shopping event.