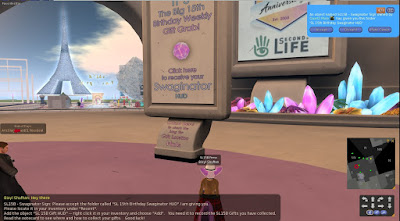 After fifteen weeks, The Second Life Fifteenth Birthday Gift Grab, (described in their blog post of the event and briefly at the end of our June 22 article of The Birthday), is coming to an end. The first fourteen weeks have offered gifts from silly string to hoverboards, to crystal balls, to teddy bears, to magic wands, and more. The fifteenth gift we were told would be reserved only for those who had collected every one of the previous fourteen gifts, and was promised to be extra special. 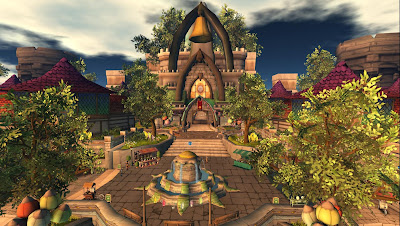 Finally on Monday September 24, the fifteenth and final gift was made available. The clue on the Linden blog was, "The FINAL SL15B Weekly Gift Grab Hint is: Home of the Moles is where this could be. Hidden among things for everyone to see." The clue led to Meauxle Bureaux (152/127/29). The sim was quite picturesque at certain angles. 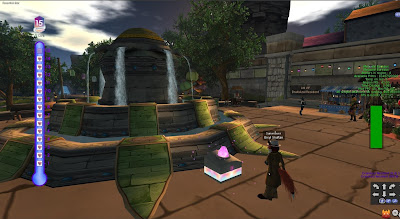 For those whom had the first fourteen notches on their "Swaganator HUD," the gift was available to claim. So I got it, and headed to a sandbox to see what the grand prize we'd all been waiting for was. 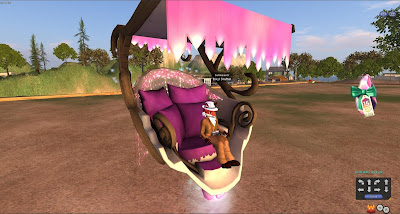 And it was ... a crystal carriage. You could sit on it. But to operate it, you needed the HUD that come with it. Once attached, you could move the carriage around, even fly it in the air. Something that would be fun for Fantasy-themed areas.

And that's it. That's the last of the SL15B Gift grab gifts. Hope you had fun collecting them. Do you have a story about a hunt area that was extra good or bad? Anything to say about a gift that was really great or a disappointment? Send your reader submissions to bixylshuftan@gmail.com