While development on Islandz, the successor of the closed virtual world InWorldz, continues, there is a little news. They now have a logo. It shows the letters big and bold, with an outline of a palm tree and a fish. There's also a wooden sign with the letters "Virtual World," in front of tropical plant leaves. 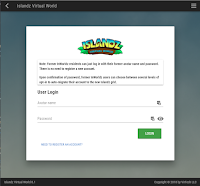 Earlier on the Islandz Discord chat, it was announced three logos were being considered, and opinions on which was best were welcome. The one that eventually was chosen got complements from several people. When I asked if this was now going to be the logo, I was told this was most likely it, though there is the possibility of a small change or two.

Also, it looks like there will be no need for former residents of InWorldz to register new accounts on Islandz. They should be able to use their old account names and passwords when it opens.

No date for the opening of Islandz has yet been set, official or closed beta, has been set.