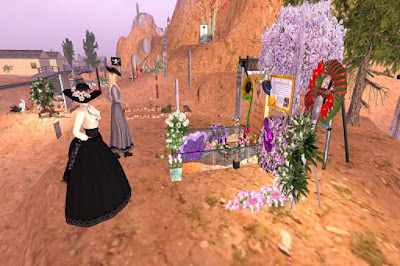 It was a year ago yesterday, September 9, 2017, in which Breezes Babii, a close friend of the Newser and a valued member of the Tombstone community, had passed away. She had been a reporter for the Newser's predecessor, the Second Life Newspaper, which was run by her SL daughter Dana Vanmoer. Her "Breezes Thoughts" were a remembered part of Dana's paper. When the old SLN folded, Breezes would send a number of articles and postcards to the Newser over time, many about her adventures in Tombstone. Several days after her death, she would be given a memorial service in Tombstone, the virtual community which had become her home here. 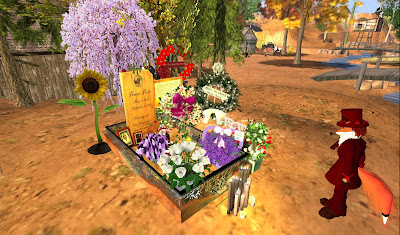 A year later, Gemma Cleanslate (and Chigadee London), and I would both visit her memorial site, taking a few minutes to recall the fun we had in the past. Gone perhaps, but not forgotten. No doubt she'll be remembered.

Top picture from Gemma Cleanslate
Posted by Bixyl Shuftan at 6:05 AM