Cynthia and Shockwave's "Bid Me" Period From Relay Season Ends 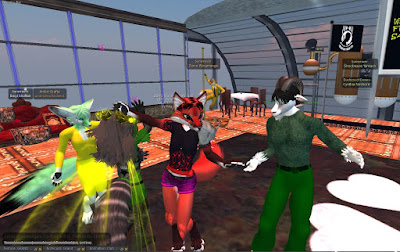 In a sense, it was the last event for Team Sunbeamers, the Relay for Life team of the Sunweaver community. During the Relay season, Cynthia Farshore, known for her anthro nannygoat avatar, volunteered for a "Bid Me Foxy" fundraising event for the team. Shockwave soon followed up with his "Bid Me Goat" fundraiser. The two "Bid-Me" events raised over 62,000 Lindens for the team when the totals were tallied on Friday June 15, and helped it reach Sapphire status that weekend. But they were stuck in their new looks for twelve weeks. 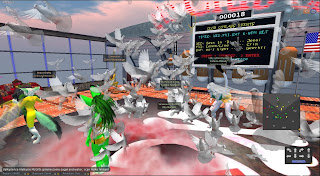 When the Relay season ended in July, Rita offered to let Cynthia and Shockwave off the hook as technically all Relay events were over. But the two answered that a promise was a promise and they would stick to it. So they stayed in their "Bid Me" looks until the night of Friday September 7 at the "Lemon/Lime" dance at Club Cutlass when the 12 weeks were finally up. For the first hour, they danced about as usual. 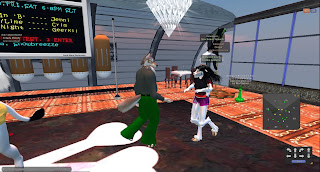 At 7PM, Cynthia vanished in a cloud of pigeons flying in every direction. Then a few minutes later, both reappeared in another cloud of pigeons and red smoke, both in their usual appearances. "Showmanship counts," Shockwave would comment. The two then resumed their dance.

And so, the last of Team Sunbeamer's events was truly over. While the team is proud to have reached Emerald rank for the first time ever, it is also tired. While the team will be doing Bid-Mes and other fundraisers next year, there will probably be no games like this year's "Cancer Shooting Train." But the next season is months away, and Cynthia and Shockwave have a few things to work on in the meantime, such as the Caledon Downs sim and the relocated Goblin Cave,