Every year, Shockwave Yareach has a game for people to play at the Sunweaver Estates. This time, he's incorporated the train ride that was opened earlier this year. He's also made it a Relay fundraiser, a small fee required to play, all proceeds going to Team Sunbeamers. 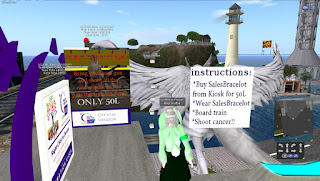 Pay the kiosk 50L, wear the SalesBracelot it gives you, grab your favorite gun, and ride the train through SIX sims, shooting cancer cells as you go. Up to six players at one time can play, or just yourself. Wanna destroy cancer? Show it that you mean business! Train runs every hour at the top of the hour.

Have fun!! And thank you all for your support.

To play the game, when the time gets close to a few minutes before the next hour, head to the White Vixen Enterprises office at Pacific Waters (147, 58, 36).  Pay the kiosk that says "Train Shootout" 50 Lindens, then wear the item (it goes by the name "SalesBracelot" in your inventory). It then loads you into the game. When the train appears, board it. And make sure you have a working gun available. 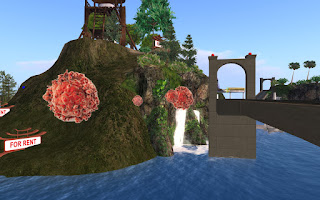 As you go down the track, you'll see red cells floating in the air. Shoot them if you can. When hit, they explode in an orange cloud. You'll only be able to do so from the train. If you fall off, you'll no longer be able to see them. In a few spots, you won't be able to shoot as the bullets will not be able to rezz. Don't worry, the train will soon move to a spot where you can resume fire. The game only works when the train is going from Northeast to Southwest. Nothing will happen when the train goes the other way at half past the hour.

The train will travel through six sims. When the train reaches the end of the track in Sunweaver Bay, you're given a score on the number of cancer cells you blasted. How high can you get?