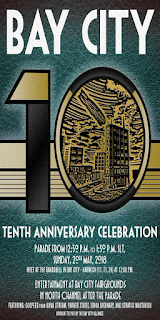 Just a reminder. Bay City, the largest urban area in Second Life and the first big project of the Linden Department of Public Works, has their anniversary event this Sunday, May 20. The parade starts in Harwich at 12:30 SLT, then goes down their main road, Route 66, ending at North Channel where the Bay City Fairgrounds are.  Following the parade, a concert starts at the Fairgrounds at 1:30, starting with DJ GoSpeed Racer, followed by live musicians Parker Static, Erika Ordinary, and Stratus Mactavish. The music is scheduled to last until 4:30PM.