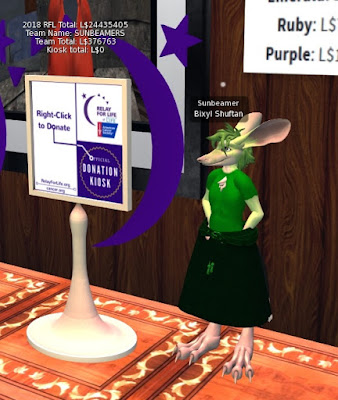 On May 23, Relay for Life's Team Sunbeamers finally achieved a goal it never had before in it's history. The team had reached Jade level fundraising, which takes 375,000 Lindens (or $1,500 USD). Team captain Rita Mariner announced the news.

Beamers:  I would have never believe it, but we are JADE!  Good going team!  Bixyl goes GREEN!  Go Relay!  Go Sunbeamers!

I had earlier stated if the Sunnies made Jade level, I'd go green for a week. So yours truly had to own up, and on top of the earlier "Bid Me Pantsless." At the suggestion of Skylark Lefavre, I went with a green anthro bilby avatar. Why a bilby? Skylark thought it was a playful pun at the actor who played Bruce Banner on "The Incredible Hulk" TV show, calling my new look "Bix Bilby" after actor Bill Bixby.

The previous level, Platinum, was reached by the Sunbeamers on April 18.  Next level is Sapphire, which is 500.000 Lindens (or $2000 USD). We already have one avatar challenge by Nydia Tungsten who says she'll go purple for a week if this level is reached. There's still several weeks until the Relay Weekend, and a few events ahead for us such as the upcoming air show. So we stand a good chance of reaching this new goal.