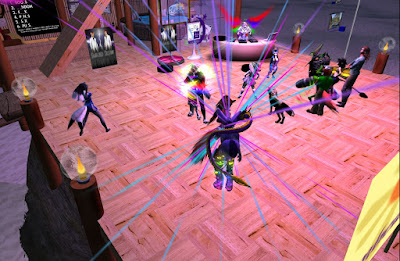 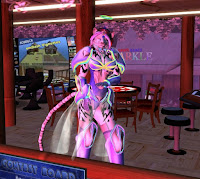 On Monday April 30, Relay for Life Team Sunbeamers held their first party of the Relay season. Called "Rave for Relay," or "Rave for Life" as DJ Khyra called it, the event had a raver theme, with people wearing glowsticks, particle effects, or glowing clothes and sometimes glowing hair. As this was a charity event, there were no tip jars out. All money given went into the Sunbeamer's kiosk.

The event lasted for four hours, with the "Dazzlecat DJ" as Khyra is sometimes called playing from 5 to 7PM SL time. From 7 to 9PM, DJ Snowbuns spun the tunes. With all of the lights, the place was best viewed at Midnight. Among those stopping by were Happy Vixen owner Nydia Tungsten and Sunbeamer team leader Rita Mariner. Although most of those showing up were from the hosting team, and other regulars of "The Vix," several Relayers from other teams stopped by, or sent cash to the "beamers" to put in the kiosk. For the first hour, only a few hundred went into the kiosk. Then more cash came in. By the end of the four hour event, a total of ten thousand Linden dollars had been raised. 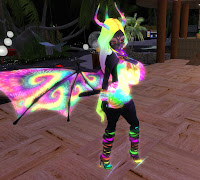 There was also a contest for the best raver look. It was won by Valkyrie "Ice" McGill.

As of now, Team Sumbeamers has raised over 276,000 Lindens. Less than 100,000 Lindens remains until the next fundraising level, Jade, to which yours truly has pledged to go green for a week when met. There are also three "Bid Me" events going on, of which 4500 has been raised so far, of which the totals will be determined 8PM Friday.